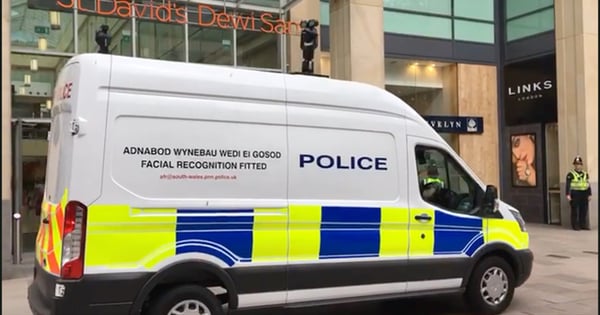 Welsh police have arrested a man after real-time facial recognition software identified him as members of the public were monitored in and around Cardiff city centre.

The automatic facial recognition (AFR) technology – built by NEC – was put in place by South Wales Police at “strategic locations in and around the city centre” in the run-up to the UEFA Champion League final on June 3.

On May 31, the AFR technology – mounted on top of a police van – picked out the unnamed man, thought to be listed in a law enforcement database of some half a million custody images.

No details of what offences the man has been accused of have been released, but I can’t help but find the prospect of innocent people being further monitored in their movements decidedly creepy.

It’s not as though the UK is an unwatched nation already. At the last count, there are approximately six million CCTV cameras in the UK – one for every 11 people. The thought of more and more devices being linked to automatic facial recognition technology raises important questions about the general public’s privacy.

Of course, not everyone is going to view this development with concerns. The likes of NEC have been building products like NeoFace Watch for some time, promoting how automatic facial recognition could aid security at border controls and inside organisations:

NEC’s NeoFace Watch solution is specifically designed to integrate with existing surveillance systems by extracting faces in real time from existing video surveillance systems and matching against a watch list of individuals. When the system identifies an individual of interest from the watch list, it raises an alert, so appropriate actions can be taken rapidly to reduce the risk of public safety threats.

We need to always be careful than in our pursuit of greater security, we don’t throw away our fundamental human rights for privacy.

Never forget. Once we go down this road, it’s unlikely we will ever turn back.