Here’s something neat that New York police are handing out to members of the public in the Big Apple. 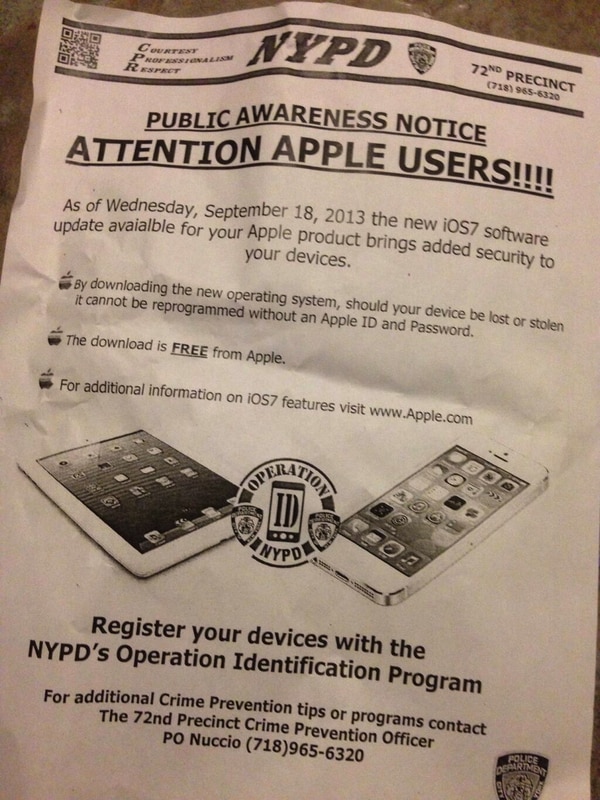 As of Wednesday, September 18, 2013 the new iOS7 software update available for your Apple product brings added security to your devices.

* By downloading the new operating system, should your device be lost or stolen it cannot be reprogrammed without an Apple ID and password.

Register your devices with the NYPD’s Operation Identification Program

As 9to5Mac reports, the New York City Police Department is handing out the above fliers at subway exits and outside Apple retail stores, in the hope that users will better protect their devices from the growing problem of “Apple picking”.

The NYPD said last year that they recorded 11,447 incidents of stolen Apple products between January 1st and September 23 2012, a whopping 40% increase over the same period in 2011.

So it’s understandable that they would encourage anything which makes life harder for a phone thief. As I described earlier this year, iOS 7 can make your iPhone a lot less attractive to thieves.

In earlier versions of Apple’s mobile operating system, someone who stole your phone could easily wipe it back to its factory state. That reactivated the device and made it simple to sell on to others. The crooks didn’t even need to know your passcode.

iOS 7, however, has upped the ante. Before iPhones can be reactivated, iPhones and iPads running iOS 7 demand that you enter your Apple ID and password.

Furthermore, any custom message you told your device to display through “Find My iPhone” will continue to appear, even after your device is erased.

Well done to Apple for introducing the technology, and a round of applause to the New York City Police Department for taking the initiative to encourage uptake of the new feature. Now all we need is for Google Android devices to catch up.

Although Google released “Android Device Manager” in August which – at first glance – looks like an equivalent to Apple’s “Find my iPhone” feature, it doesn’t go far enough in my opinion.

That, and the problem of many Android devices lagging sadly far behind in terms of system updates and OS upgrades, means that this is a race that the iPhone will continue to have a strong lead in.