I suspect we all had a good chuckle when the story broke that a TV news report stirred viewers’ voice-activated assistants to attempt to purchase dolls houses.

Heck, we even chortled about it in a recent Smashing Security podcast, and advised users enable a PIN or turned off voice-activated purchases altogether.

And it was during that podcast that we raised the concern that Amazon’s Alexa-powered Echo might not be a good fit for households which contained a real, living human being called umm… Alexa.

What’s more, as users inevitably plug their Alexa-driven digital assistants ever more into the internet of things, there is a real risk that mischief makers and criminals could take advantage of the device’s seeming inability to tell them apart from legitimate authorised users.

And that’s a genuine concern if your Alexa (the device, not the wife) is within hearing distance of your front door or an open kitchen window, and not just the TV set.

One solution? Well, wouldn’t it be great if you could change your Amazon Echo or Echo Dot gadget’s so-called “wake” word to something less predictable.

CNet has documented how to change Alexa’s name through the Amazon Alexa app or alexa.amazon.com, but it appears you’re limited to choosing between “Alexa”, “Computer”, “Amazon”, or “Echo”. 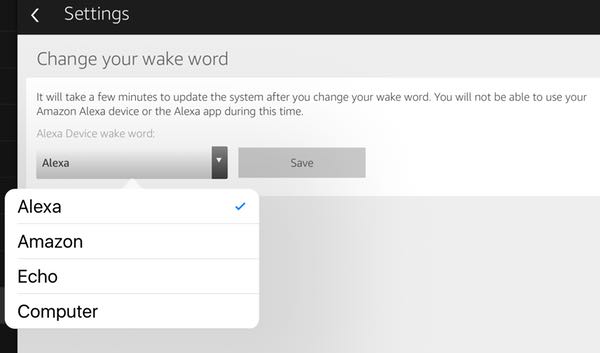 Wouldn’t it be great if you could choose your own name like “Hal”, “K9”, “Orac”, or “R2D2”? Or maybe something even less predictable?

If there’s a concern that the device may not recognise when you shout a user-chosen name like “Marvin” or “Deepthought” across the living room at it, then surely it could be trained?

Waking your Alexa device should be as hard for an unauthorised party to do as guessing your password. Three or four possibilities, just isn’t good enough.