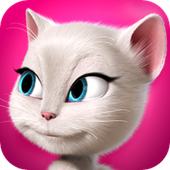 Regular readers are clued-up about the various scams and hoaxes that frequently spread across social networks, and are unlikely to be duped.

But there are plenty of other Facebook users out there who unwittingly – and with often good intentions – spread hoaxes, scams and chain letters in the mistaken belief that they are doing someone a favour.

Take, for instance, the scare that has been spreading far and wide across Facebook in the last few days – warning users about an iPhone and Android smartphone app for kids called “Talking Angela”.

If you believed the warnings you would think that paedophiles are hiding behind the app, and using it as a way to groom your children.

However, you *shouldn’t* believe the warnings. And, in particular, you shouldn’t share the bogus alert to your own friends and family. Because all you are doing is perpetuate a scare that is without foundation.

Here’s an example of the current scare that is being spread on Facebook: I cant even in words say what I just found out.. I am SHOCKED and want to tell and let my friends and family be made aware so they can make sure their children are safe!!! Angelica stayed home from school today and thank GOD she did. Because she was on her ipod playing a game called talking angela, which is similar to talking tom, anyway as she is sitting next to me this interactive cat says to her hi angelica where is your brother? She says o hes right here next to me the cat says o cool, then the cat says so what do you do for fun? Ang says I dont know, (now im being quiet and listening because I think its weird this angela cat knows she has a brother and is talking to her like a person) then its voice changes and in some weird robotic voice it says angelica when u date what do u do on your dates? She looked at me got red in the face and said nothing, then it said stick out your touunge, ill stick mine out too, it said what are some things u can do with your tounge? I can find many things to do with my tounge it said it said lets intrract w our toungues. I that point I had heard enough I zaid ang shut it off now! I was freaked out called the police departnrnt they came to the house saif they would have the internet investigations unit andpedofile investigations unit look into it, they called me an hour latet and said something is behind that cat!!! They dont know if it is local or over seas. While the police officer was there and ang was talking to him she told the police officer saturday night her cousin and her were on the app w angela and it asked the girls their names what her brothers name was what school they BOTH went to, and it took a picture of angelica!!! This is under serious investigation right now! When I googled talking angela I cant even begin to tell you what creepy stuff came up! Google it for yourselves please!! But some things are the cat asking girls for their phone numbers! And if theyve had their firat kiss!!! Take this app off your phone please! Theres a big chance thid cpuld be a door for pedofiles.the police said they have seen thing *like* this but never actually through a childs app but that they are not putting it past them! The girls told angela the cat on saturday their names and she had a brother and then on monday morning when angelica turned the app back on, It remebered her name and that she had a brother!!! These things ARENT supposed to ask you questions!!! and especially not questions about dating toungues or kissing!! I am disgusted! I dont feel safe at all right now! Knowing that there was some creep talking to my daughter and my neice through a talking app!!! Please if you have this app or any like it the police are saying take it off of your phone!!! Copy and share and send out PLEASE! This word needs to spread! I pray the ocean county investigators can crack this thing open!!!!!

And it’s not just English-speaking Facebook users who are spreading the scare on the social network.

Here, for instance, is an example of the scare that has been widely spread amongst French-speaking Facebook users. 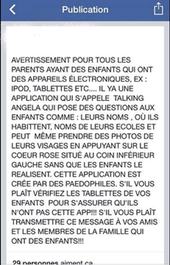 The truth is that Talking Angela is just a chat-bot. A modern-day equivalent to the “Eliza” program that people used to entertain themselves with 25 years ago. It simulates a real-life conversation, but it’s just a programme.

And it’s not trying to groom your children.

The bogus warning may claim that parents of young children need to watch out for a rogue iPhone/iPad add that (allegedly) steals children’s names and details of where they go to school, but everyone who has properly examined the app has found it to be entirely benign.

Indeed, there are no obvious privacy concerns that differentiate it from thousands of other iPhone apps.

Outfit 7, the developers of the “Talking Angela” app, are well-known and have churned out plenty of similar apps including “Talking Tom Cat”, “Talking Ben the Dog” and “Talking Gina the Giraffe”. Strangely, it’s Talking Angela the cat which gets all the unwanted attention for some reason.

So, if you have mistakenly warned your friends about “Talking Angela”, now might be a good time to eat humble pie and admit that you made a mistake. There’s no shame really in telling your online friends that you were wrong, and pointing them to an article like this so they don’t panic that their young children might have been speaking to a paedophile.

And, importantly, clue yourself up for the future. You can learn much more about Facebook scams and hoaxes by regularly reading websites like this one.