As if there wasn’t enough nonsense being said about the “Talking Angela” smartphone app, with chain letters spreading claiming (falsely) that it is a cover for paedophiles, or yours truly receiving phone calls from concerned mothers who have (mistakenly) concluded that I am the app’s creator…

Now a sick “humour” website has spread an untrue story, claiming that a seven-year-old boy has gone missing after his mother installed the Talking Angela app onto her iPhone. 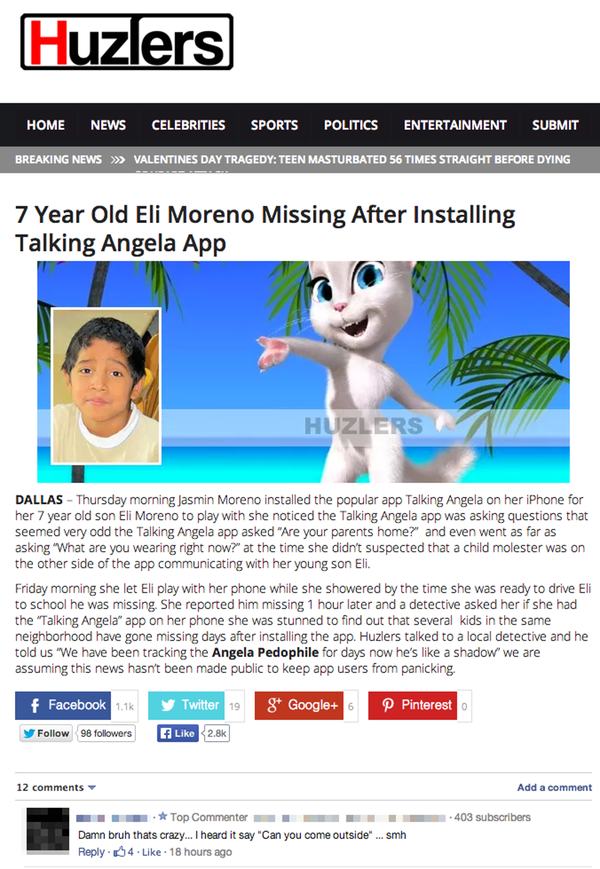 DALLAS – Thursday morning Jasmin Moreno installed the popular app Talking Angela on her iPhone for her 7 year old son Eli Moreno to play with she noticed the Talking Angela app was asking questions that seemed very odd the Talking Angela app asked “Are your parents home?” and even went as far as asking “What are you wearing right now?” at the time she didn’t suspected that a child molester was on the other side of the app communicating with her young son Eli.

Friday morning she let Eli play with her phone while she showered by the time she was ready to drive Eli to school he was missing. She reported him missing 1 hour later and a detective asked her if she had the “Talking Angela” app on her phone she was stunned to find out that several kids in the same neighborhood have gone missing days after installing the app. Huzlers talked to a local detective and he told us “We have been tracking the Angela Pedophile for days now he’s like a shadow” we are assuming this news hasn’t been made public to keep app users from panicking.

However, it is utter balderdash.

But that’s not stopping some people from sharing the story via social networks like Facebook, helping to perpetuate the myths about the Talking Angela app. 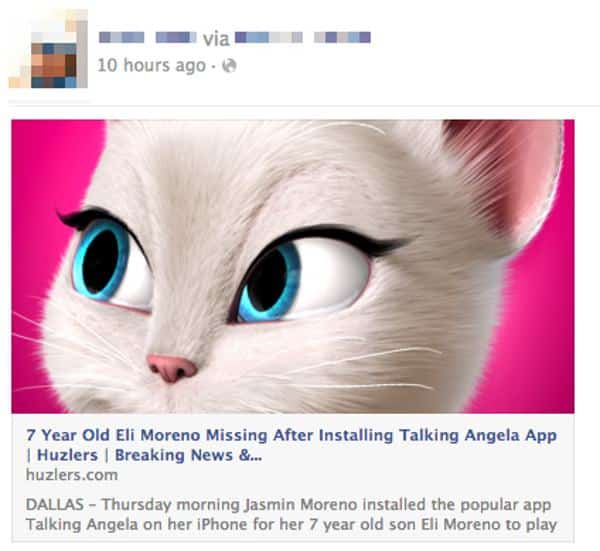 Sigh… Hoaxes would find it a lot harder to breath if people were a little more skeptical of what they read online, and asked themselves if the source is reliable.

After all, Huzlers, the website hosting this false news story, recently published a clearly untrue article claiming that McDonalds was not just serving human meat… but the meat of human children.

The USDA (United States Department of Agriculture) has seized McDonald’s production and shipping and will call for more meat factory inspections and restaurant inspections. The FBI is also investigating the factories. FBI agent Lloyd Harrison told Huzler reporters “The worst part is that it’s not only human meat, it’s child meat. the body parts that were found across the U.S. factories were deemed to small to be adult body parts, this is truly horrible”.

Clearly Huzlers is hardly the kind of news outlet you should trust.

If only folks checked their facts before sharing links with all of their online friends. Unfortunately it seems that common sense just isn’t that common.