Many internet users aren’t too keen on being tracked by ad-tracking cookies as they surf the web.

So it was with some cheer that Google announced, in January 2011, the availability of its own “Do Not Track” extension for Chrome, called Keep My Opt-Outs. 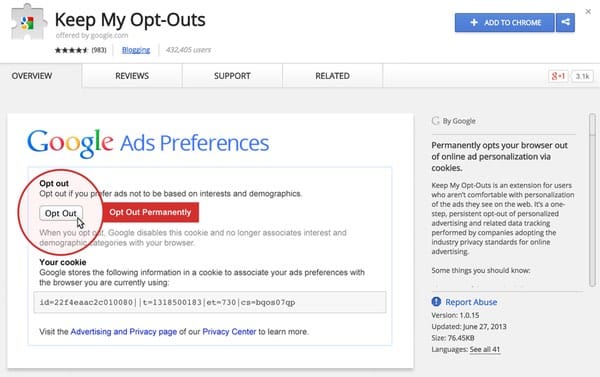 The extension promises to stop all those creepy personalised ads, and survive a clearing of your browser’s cache.

But there’s bad news for any of the 400,000+ users who rely upon Google’s Keep My Opt-Outs extension. It hasn’t been updated for years.

As Jonathan Mayer, a computer scientist and lawyer at Stanford, describes, Keep My Opt-Outs relies upon its own internal cookie list to know what to block.

The extension doesn’t include a special mechanism for updating its cookie list. In order to revise which businesses are included, Google has to release a new version.

Over the past several years, Google appears to have… forgot. The latest revision of the cookie list was in October 2011.

And Google’s lack of updates is a problem, because there are lots more advertisers out there whose personalised ads could be easily stopped from tracking you. Amongst them, a little one you might have heard of called Facebook.

Mayer’s advice? Switch to Disconnect or Privacy Badger. He adds that Adblock, Adblock Plus, and Ghostery are also excellent privacy tools, if configured correctly.

And if anyone from Google is reading this, maybe you’d like to either withdraw the Keep My Opt-Outs extension or update it in such a fashion that it can be properly maintained?

3 comments on “Keep My Opt-Outs, the Google Chrome privacy extension, hasn’t been updated for years”