Can you guide Wibbling Wilf round the maze madness?

Poor Wilf has fallen through a freak wormhole in the space-time continuum. Armed only with his leaky jam sandwich he must try to defeat the evil Glumphs.

As Wilf wibbles around the screen he drops jam everywhere. As luck should have it, the one thing the Glumphs really can’t stand is .. JAM !

Boy ! Do they get mean when they’re angry..

Having written the text adventure games Jacaranda Jim and Humbug, Wibbling Wilf was my first attempt to write a game in graphics mode.

In those days the best graphics most PCs could really manage were 320×400 pixel four colour CGA graphics.

Computers supporting superior EGA and VGA graphics were available, but the technology had not been widely adopted – it made more sense as I was trying to entertain as many PC owners as possible to stick to CGA.

Something that was unusual about Wibbling Wilf, however, was its support for the Creative Labs SoundBlaster card.

Wilf was one of the very first shareware games to support the sound card. I had been the first person I’d known to have bought the device and I had invested in some code libraries which helped me build sampled sound into the game. 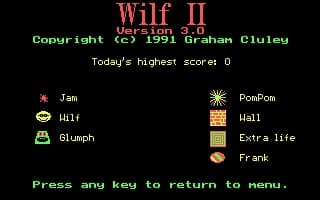 In the game you can hear me playing the harmonica (the “toot-toot” sound) and gargling when Wilf blasts the Glumphs with PomPoms.

Of course, unlike my text adventure games there were no frustrating puzzles to vex players, and thus less incentive to register the games by sending me a cheque. To get around this problem I developed WILFED, a WILF maze EDitor, which allowed registered players to design their own mazes for the Glumphs, Frank and – of course – Wilf himself to play in.

TRIVIA: Why is the game called Wilf? 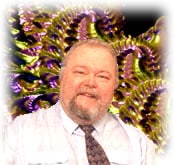 Wibbling Wilf was named after journalist Wilf Hey. That’s a picture of the real Wilf on the right. At the time I wrote Wilf (Christmas 1990 I think), Wilf Hey was the disk editor for popular computer magazine PC Plus, and I thought writing a game where he was the hero would ensure that I caught his attention.

Unfortunately CGA graphics couldn’t really do justice in rendering the real Wilf Hey into a computer game, which probably explains why the game didn’t capture Wilf’s attention quite as successfully as I would have hoped.

By the way, fact fans, Wilf Hey is apparently the person who coined the term GIGO (Garbage In Garbage Out), so hats off to Wilf..

The game Wibbling Wilf directly changed the course of my life. The young daughters of famous anti-virus guru Dr Alan Solomon loved the game, and drew pictures of Wilf, Alan the Gribbley (one of the stars of Jacaranda Jim). Alan was kind enough to send me the pictures, a packet of cheesie biscuits, and a letter telling me that if I wanted a job to get in touch.

I did get in touch, and was lucky enough to get a job at S&S International (later known as Dr Solomon’s Software) writing the first ever version of Dr Solomon’s Anti-Virus Toolkit for Windows.

During my time working with Alan Solomon I actually met Wilf Hey in person for the first time. I can’t remember now if I told him that his name had inspired one of my games or not. But the secret is definitely out now..

TRIVIA: Why did you design Frank to look like a boiled sweet?

Frank, who annoyingly eats up the jam that you’re trying to leave around the mazes and generally gets in the way, is the victim of a crazed biological experiment perpetrated by evil Glumph scientists. This intense subplot, and the full-motion-video sequence showing the scenes of atrocity perpetrated against Frank by the Glumphs, were only left out because of concerns they would distress young kiddywinks rather than err.. because of the graphical limitations of CGA.