Just a few days ago Twitter sent out an advisory to media organisations warning of a spate of account hacks, and offering sensible tips on how companies could avoid becoming the next victim.

It looks like E! Online, the celeb gossip and entertainment outlet, didn’t get the memo.

Yesterday it’s Twitter account was hacked by (it is assumed) members of the Syrian Electronic Army, and fake stories were were posted about celebrities such as Angelina Jolie and Justin Bieber.

While Angelina Jolie was said – by the hacked E! Online Twitter account – to believe that Jordan was “to blame for the Syrian refugees’ atrocious conditions”, a bogus story about Bieber’s sexuality was tweeted out: 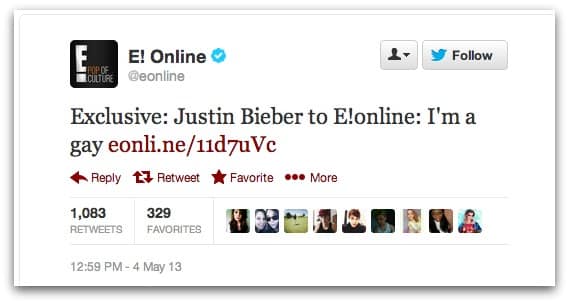 E! Online managed to wrestle control of the accounts away from the hackers, and deleted the offending tweets.

Chances are that the hack was perpetrated through a similar modus operandi to earlier attacks by the same group of hackers – namely targeting workers inside a media organisation with a fake email purporting to be a breaking news story… and when the innocent user clicks on the link they have their password phished from them.

One has to wonder, once again, who the next victim of the Syrian Electronic Army will be…. or have media agencies wised up about the importance of securing their social media accounts, and training their staff in how to better defend their personal computers and online accounts?