Hackers operating under the banner of the “Syrian Electronic Army” have once again hijacked high profile Twitter accounts.

This time it was the official accounts of the FIFA World Cup and FIFA President Sepp Blatter who fell foul of the hackers. 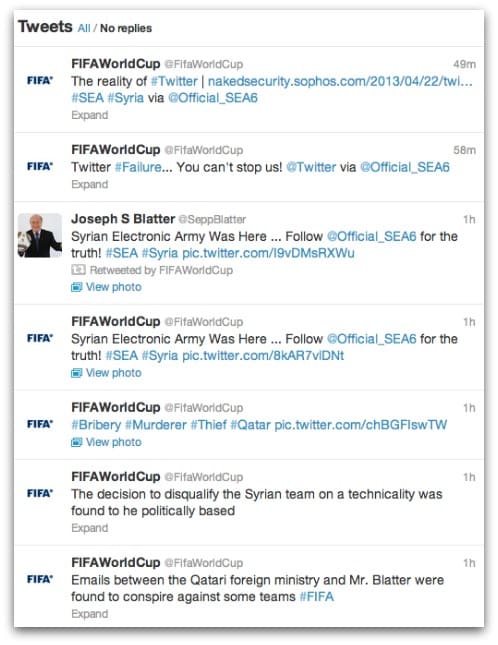 As I’ve described on Sophos’s Naked Security site, Twitter has been having something of a running battle with the Syrian Electronic Army in recent days – shutting down its Twitter accounts, only to see the SEA creating new ones.

The attempts by Twitter’s security team to shut down the SEA seems to have done nothing to discourage the hackers, who have taken amusement from hijacking accounts belonging to organisations including media outlets like CBS and the BBC.

Remember folks, just because a Twitter account is “verified” doesn’t mean you can trust every tweet posted from it. If there has been a breach in security, that message you have just read or that link you are about to click on might not have been published by the real owner of the account.