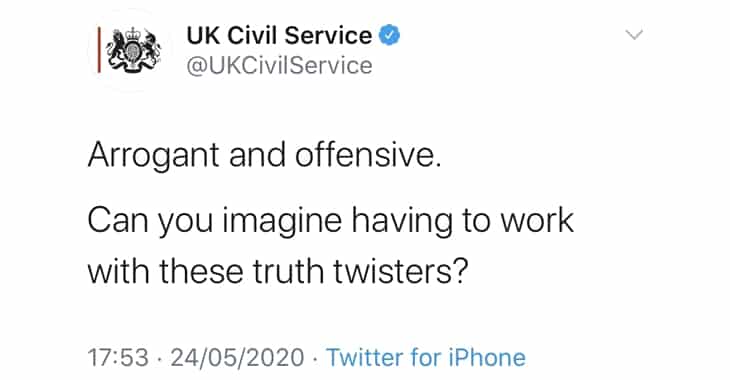 “Arrogant and offensive. Can you imagine having to work with these truth twisters?”

The tweet was posted minutes after Prime Minister Boris Johnson concluded a controversial briefing where he defended his chief advisor Dominic Cummings, who had allegedly flouted the UK’s Coronavirus “stay at home” lockdown regulations.

Cummings is reported to have twice travelled 270 miles from London to Durham with his family, some of whom were exhibiting symptoms of Covid-19 at the time, while the general public has been told to stay at home, and not visit their families.

Within 10 minutes the unauthorised message had been retweeted 30,000 times, which probably reflects the public’s feelings at the moment.

The UK’s Cabinet Office announced shortly afterwards that the tweet was unauthorised, and that an investigation was underway.

No doubt that means someone in the Civil Service’s social media team will be losing their job.

Right now it sounds like the UK government is taking the tweet more seriously than Cummings’ actions.

You can have a strong, unique password, you can have multi-factor authentication in place, but good luck preventing a member of your social media team ‘going rogue’.