On Saturday 8th March, Windows XP users will start to see this message appearing on their computers.

As Microsoft’s Brandon LeBlanc explains in a blog post, Microsoft customers using the Home or Professional editions of Windows XP will start to receive the notification on their desktop this weekend, via Windows Update.

If you click on the link on the notification you should be taken to Microsoft’s Windows XP End of Support website, which either encourages you to update to Windows 8.1 or… umm.. buy a new PC. 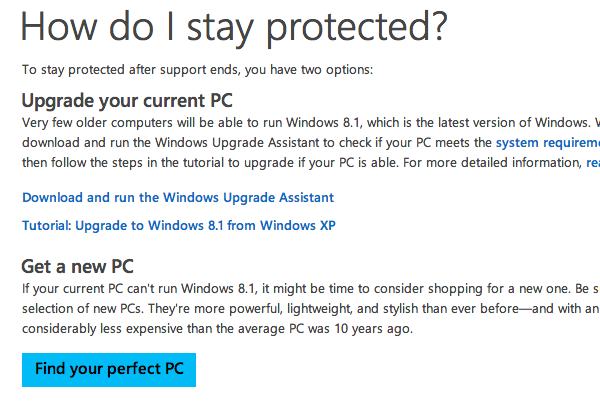 To make the upgrading process slightly less painful, Microsoft has announced that it has partnered with Laplink to provide XP users with a free data migration tool called PCmover Express, which can copy your files and settings to a new device.

I guess that’s better than nothing, but it’s not going to be enough to please everyone. I notice, for instance, that many organisations are already asking Microsoft if they will be able to *stop* the notification message from appearing on its users desktops, as they are worried that it will increase their tech support workload after this weekend.

Meanwhile, let’s take a look at that notification message from Microsoft again.

Does it strike anyone else that the whole “Click Here” thing looks remarkably phishy?

It’s easy to imagine how many users might react to the sudden appearance of the pop-up with suspicion, or (if I want to be really pessimistic) that some online criminals might even mimic the look-and-feel of Microsoft’s warning to dupe unsuspecting users into clicking on a link which might lead to an online scam.

Let’s hope that doesn’t happen, and that computer users update their systems as quickly as possible – and that the number of computers still running Windows XP after April 8th is kept to a minimum.

After all, that’s pretty important for all of us who want to see a safer internet, seeing as there won’t be any more critical security patches released for the ageing platform from Microsoft in little over a month’s time.