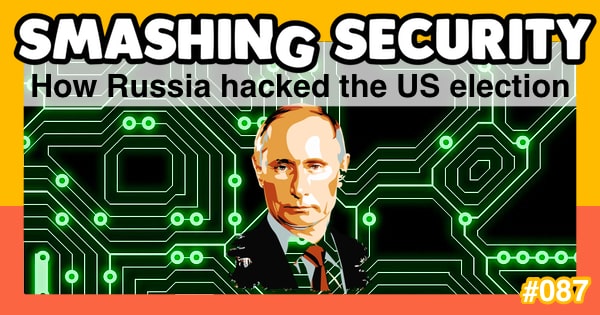 Regardless of whether Donald Trump believes Russia hacked the Democrats in the run-up to the US Presidential election or not, we explain how they did it. And Carole explores some of the creepier things being done in the name of surveillance.

All this and much more is discussed in the latest edition of the award-winning “Smashing Security” podcast by computer security veterans Graham Cluley and Carole Theriault.

Smashing Security #087: 'How Russia hacked the US election'

LastPass Enterprise simplifies password management for companies of every size, with the right tools to secure your business with centralized control of employee passwords and apps.

Go to lastpass.com/smashing to see why LastPass is the trusted enterprise password manager of over 33 thousand businesses

People are the key to minimizing your Cyber Security risk posture. MetaCompliance makes this easier by providing a single platform for Phishing, Cybersecurity training, Policy, Privacy and Incident management. Listeners can get a 10% discount off the high-quality CyberSecurity eLearning catalog by quoting the code SMASHING. Visit www.metacompliance.com now.

Remember: Subscribe on Apple Podcasts, or your favourite podcast app, to catch all of the episodes as they go live. Thanks for listening!

2 comments on “Smashing Security podcast #087: How Russia hacked the US election”