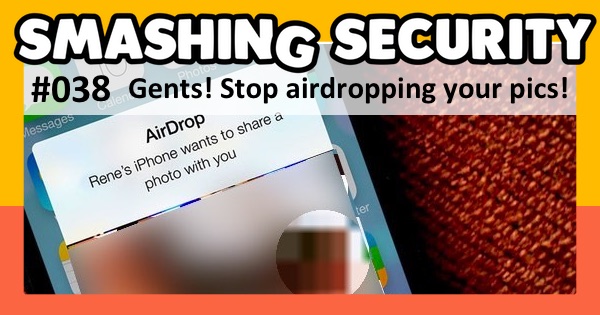 WannaCry hero Marcus Hutchins (aka MalwareTech) pleads not guilty to malware charges, the Scottish parliament is hit by a brute force attack, IoT smart locks aren’t so smart, and.. ahem.. someone is sending intimate pics via AirDrop to unsuspecting commuters.

All this and more is discussed in the latest edition of the “Smashing Security” podcast by computer security veterans Graham Cluley and Carole Theriault, joined this week by technology journalist Geoff White.

Sign up for free daily threat intelligence updates at recordedfuture.com/intel. Thanks to Recorded Future for their support.

Remember: Subscribe on iTunes or your favourite podcast app, to catch all of the episodes as they go live. Thanks for listening!