A video of two girls fighting (and one of them getting clonked on the head with a shovel) has been spreading virally across social networks.

You can watch the key moment in the video below.

Anyway, the video spread rapidly across social media and it didn’t take long before Facebook users began to spread a message that the girl who was shovel-clonked (16-year-old Miranda Lockwood) had died from her injuries.

No doubt all of those people who had been sharing the video of the dumb teenage fight felt a little bad that the girl who came out worse had suffered the eccentric and grisly fate of being killed by a shovel.

Here is the message and photo of a “news” report that they have been sharing: 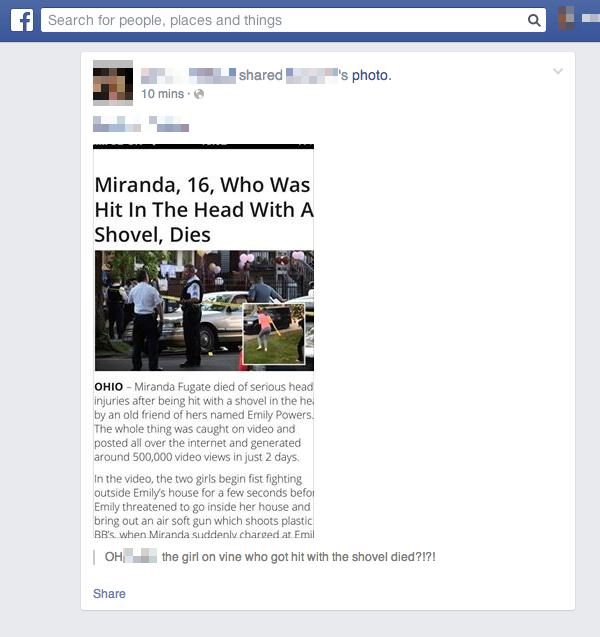 Miranda, 16, Who Was Hit In The Head With A Shovel, Dies

OHIO – Miranda Fugate Lockwood died of serious head injuries after being hit with a shovel in the head by an old friend of hers named Emily Powers. The whole thing was caught on video and posted all over the internet and generated around 500,000 video views in just 2 days.

In the video, the two girls begin fist fighting outside Emily’s house for a few seconds before Emily threatened to go inside her house and bring out an air soft gun which shoots plastic BB’s, when Miranda suddenly charged at Emily, Emily grabbed a nearby shovel and “cracked” Miranda in the dome.

The truth, however, is somewhat different. Miranda “shovel girl” Lockwood hasn’t died. As HoaxSlayer reports, the story of her alleged death is bogus, and has been spread by a website called Huzlers that specialises in ridiculous made-up stories (presumably to drive traffic that earns it advertising revenue). From Huzlers’ own boilerplate:

Huzlers.com is a combination of real shocking news and satire news to keep its visitors in a state of disbelief.

There’s a number of people who need to be taken to task here:

Firstly, the two girls fighting. I don’t want to sound like a grumpy old man, but… it was clearly moronic behaviour, and the fight could have left one of them seriously injured. Don’t throw shovels at each other, folks.

Secondly, Huzlers. It’s sick to suggest that a young person has died when they haven’t. I’m sure you don’t give a damn what anybody thinks, but it’s a shame you can’t find a job that you might be proud to tell somebody about.

Finally, Facebook users. Stop believing everything you read on the net and blindly sharing it with your online friends. Such behaviour only perpetuates hoaxes and – in the worst cases – helps scams and malicious links to spread to your Facebook friends.

4 comments on “Shovel Girl dead? No, it’s another hoax spreading on Facebook”