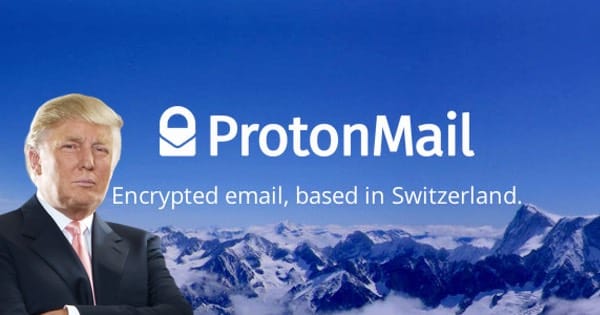 The US election has divided America in two.

You’re either cock-a-hoop that Donald Trump has won the keys for the White House, or you’re mortified. There doesn’t seem to be much of a middle ground.

And if you’re one of those folks who is concerned about how a new Commander-in-Chief might grant more powers to America’s law enforcement and intelligence agencies to spy on internet communications, the surprise election result might be the impetus for you to rethink about how you’re managing your privacy online.

Andy Yen, co-founder of ProtonMail, reports that in the two days since Donald Trump’s victory, the Switzerland-based encrypted email service has seen its number of new users increase by 100%:

“Since Trump’s victory, the number of new users coming to ProtonMail has doubled compared to the previous week. Many of our new users have voiced a few common concerns both on Twitter and also in emails to us. Given Trump’s campaign rhetoric against journalists, political enemies, immigrants, and Muslims, there is concern that Trump could use the new tools at his disposal to target certain groups. As the NSA currently operates completely out of the public eye with very little legal oversight, all of this could be done in secret.”

According to ProtonMail, it would be naive to view the desire for end-to-end encrypted email as purely a battle between the political left and right:

“ProtonMail users have always come from both the left and right side of the political spectrum. Today, we are seeing an influx of liberal users, but ProtonMail has also long been popular with the political right, who were truly worried about big government spying, and the Obama administration having access to their communications. Now the tables have turned.”

ProtonMail is right. The revelations of NSA whistleblower Edward Snowden have laid bare the truth about what intelligence agencies were doing to spy on companies and individuals, without proper oversight by government, and without the knowledge of the public.

And as so many of the internet services we rely upon every day are based in the United States, a new President is something that potentially impacts the privacy of all of us around the world.

Services like ProtonMail, a VPN, the Signal instant messaging app, and the DuckDuckGo search engine can help keep our online activities private and send a message to politicians that we have grave concerns about government mass surveillance.