You can probably guess what happened next, right? That’s right…

[spoiler title=”Click here to see how the internet calmly reacted”]

Inevitably, some people wondered out loud whether the NYSE’s downtime (especially when it came on the same day that United Airlines flights were grounded and the Wall Street Journal’s website was disrupted) might be the result of a malicious attack by evil hacker masterminds. 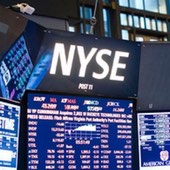 Some even went so far as to specifically blame Chinese hackers.

Even the shy-and-retiring John McAfee was unafraid to put his cards on the table and publicly assert that Anonymous was to blame, describing the likelihood of the three events happening independently on the same day as “one in a billion”.

Well, I wonder if John McAfee plays the lottery…

Because the NYSE has published a statement on its website, explaining that the problems were not due to a hacker attack, but instead a plain-and-simple configuration problem with a new version of software rolled out on customer gateways. 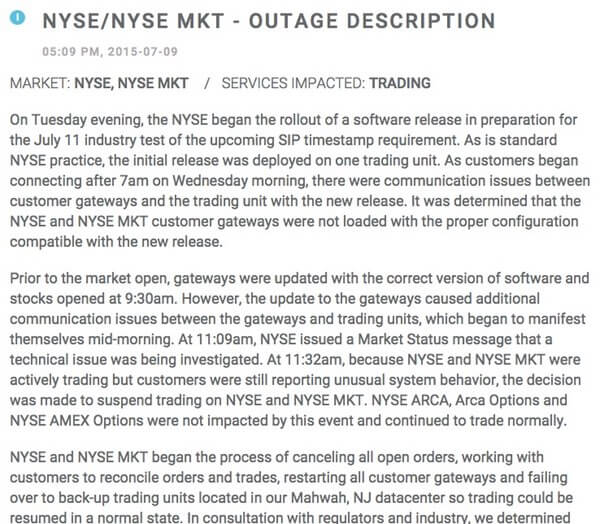 Here is the text of the NYSE’s explanation of the outage in full:

On Tuesday evening, the NYSE began the rollout of a software release in preparation for the July 11 industry test of the upcoming SIP timestamp requirement. As is standard NYSE practice, the initial release was deployed on one trading unit. As customers began connecting after 7am on Wednesday morning, there were communication issues between customer gateways and the trading unit with the new release. It was determined that the NYSE and NYSE MKT customer gateways were not loaded with the proper configuration compatible with the new release.

Prior to the market open, gateways were updated with the correct version of software and stocks opened at 9:30am. However, the update to the gateways caused additional communication issues between the gateways and trading units, which began to manifest themselves mid-morning. At 11:09am, NYSE issued a Market Status message that a technical issue was being investigated. At 11:32am, because NYSE and NYSE MKT were actively trading but customers were still reporting unusual system behavior, the decision was made to suspend trading on NYSE and NYSE MKT. NYSE ARCA, Arca Options and NYSE AMEX Options were not impacted by this event and continued to trade normally.

NYSE and NYSE MKT began the process of canceling all open orders, working with customers to reconcile orders and trades, restarting all customer gateways and failing over to back-up trading units located in our Mahwah, NJ datacenter so trading could be resumed in a normal state. In consultation with regulators and industry, we determined that we would implement a complete restart and that NYSE MKT primary listings would resume trading at 3:05pm and NYSE primary listings and NYSE MKT Tape C symbols would resume trading at 3:10pm. Trading resumed as scheduled and the closing auctions accepted orders and executed normally. All NYSE and NYSE-MKT listed securities traded for the entire day either on NYSE and NYSE MKT or other market centers.

Like I said at the time, “the NYSE could be suffering from a technical glitch that has nothing to do with hoody-wearing hackers”.

Quite often people jump to the assumption that malware or online criminals are to blame, rather than a less-exciting explanation.

3 comments on “NYSE: Bad software rollout – not hackers – took out the Stock Exchange”