John Oliver, a Brit who appears to have become something of an American TV star after years of apprenticeship on The Daily Show with Jon Stewart, used his own HBO show to tackle the topic of net neutrality earlier this weekend.

If cable companies like Comcast get their way, we could end up with a two-tier system for the internet, with big businesses able to pay for speedier access.

The satirist argues that because the issue of net neutrality is too boring for the media to cover the average internet user is either unaware or indifferent to the plotting of cable companies, and he doesn’t appear to be wrong.

In the above video, which is well worth a watch in its entirety, John Oliver calls upon viewers to express their displeasure via the FCC website.

Can you guess what happened next?

We’ve been experiencing technical difficulties with our comment system due to heavy traffic. We’re working to resolve these issues quickly.

By the way, if you find even John Oliver’s take on the net neutrality debate too heavy-going, here is the same topic tackled with immense style in the following video with a little help from a rapping “Tim Berners-Lee”.

If you feel like having your opinions heard, you can leave a message on the FCC’s website.

As they’ve had trouble keeping it up (no sniggering at the back…) I won’t tell you the FCC’s web address. But here’s a picture of that nice Mr Oliver. 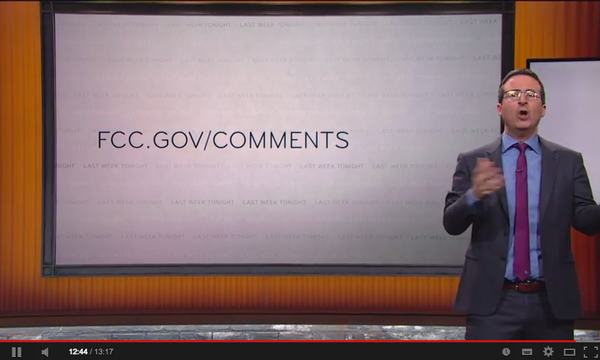