It sounds like a puzzle worthy of a Sherlock Holmes novel.

How *would* cybercriminals extract information from a malware-infected computer that they *don’t* have physical access to, and that *isn’t* connected to any networks, WiFi or the internet?

At first, you might think it’s impossible. But there is, claim German computer scientists at the Fraunhofer Institute for Communication, Information Processing, and Ergonomics (FKIE), a way.

The idea, described in a paper entitled “On Covert Acoustical Mesh Networks in Air”, is that the data can be sent at high frequency over the air as computer operating systems do not tightly control a program’s access to the speaker.

Indeed, Hanspach and Goetz go further and describe how an over the air broadcast of leaked data could have its range extended through the creation of a secret acoustical mesh network – effectively a botnet of drone computers receiving high frequency sounds and hopping them further along. 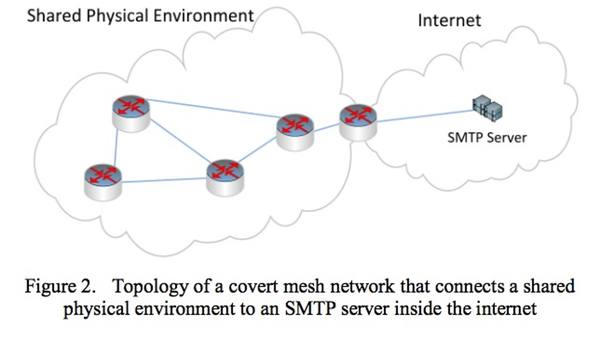 So, let’s just back up for a second before people add two and two together and make five…

Firstly, and most importantly, this research does not mean malware can infect your computer via sound.

Playing the individual bytes of a piece of malware code at any frequency is not going to infect the computer hearing the sound through its microphone unless it has already been compromised in some way to act upon receiving executable code in that way.

And, if the target computer has already been compromised to act upon unusual data sent at high frequency, why go to all the effort of transmitting code to it over the air anyway?

Secondly, the bad guys still need a way of infecting the air-gapped target computer in the first place, in order to exfiltrate data from it. Remember, this is a computer which is not connected to any network, is not on WiFi, and probably has tight controls over who can physically access it. Imagine, for instance, malware planted on a USB stick known to be used by staff who use the computer, or meddling that could be done in the supply chain in regards to software destined for installation on the target computer, or if an employee of the targeted organisation turned rogue.

But it does make things much trickier.

Thirdly, it’s not just the target computer that needs to be compromised. As the FKIE research reveals, the physical range of the data transmission between one computer’s speaker and another’s microphone is quite small, necessitating that a series of computers may need to be comandeered to act as a transmission network.

If you’re still worried about this threat affecting your air-gapped computers, there are some steps you can consider.

Me? I’m not going to let this bother me and will sleep soundly in my bed tonight. Although I pity Mrs Cluley, who may have to put up with my subsonic snoring…