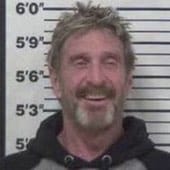 This is not a false alarm. Yes, you read that correctly.

John McAfee, the shy-and-retiring inventor of the McAfee anti-virus product and more recently Belize’s most notorious fugitive, has filed the necessary paperwork with the Federal Election Commission to run for the presidency of the United States.

McAfee, who Intel is keen to point out has not been involved with the McAfee anti-virus products since around the mid-1990s, always was a master at grabbing the media’s attention.

Whether it was predicting that five million PCs would have their hard drives wiped by the Michelangelo virus on March 6th 1992, claiming he has been in a police shootout after being arrested on suspicion of driving under the influence of drugs, or making admittedly quite amusing but NSFW videos about how terrible the McAfee anti-virus product is, he’s always been a successful attention seeker.

So, a US presidential run seems quite in character for John McAfee to me.

According to The Hill, the eccentric millionaire claims that “thousands” of members of the public have urged him to run, and he is considering founding his own political party.

Next week, Fridrik Skulason will be on the front cover of Sports Illustrated’s swimwear edition and Dr Alan Solomon will be pronounced Pope.

8 comments on “John McAfee is running for president”