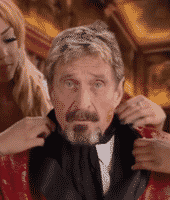 He sold the company back in the early 1990s, so even though it still carries his name he has nothing to do with it these days. It’s now a business unit at Intel.

Since his heady anti-virus days, John McAfee has been keeping .. , ummm.. himself busy with various escapades.

Such as – oh, I don’t know – running away from his home in Belize disguised as a Guatemalan trinket peddler, after the authorities named him as a “person of interest” in their investigation into the fatal shooting of one of his neighbours.

Regardless, according to John McAfee, he still gets plenty of people asking him how they can uninstall the anti-virus software that bears his name.

For those people, he’s made this NSFW video, where one of the founding fathers of the anti-virus industry puts on his smoking jacket and speaks directly to computer users around the world.

And because it’s John McAfee, he’s surrounded by scantily-clad young ladies, and there is some evidence that he’s been snorting up bath salts through a crazy straw.

How To Uninstall McAfee Antivirus

“15 years ago I had some beautiful software and they took it over.. I don’t know what they did. It was like the time I hired that Bangkok prostitute to do my taxes while I f**ked my accountant. It was terrible. The same f**king thing is going on now”

The point of the video seems to be unclear. There’s no way it’s going to make itself into the list of the worst videos ever made by anti-virus companies, for instance.

However, my guess is that it’s designed to boost his fan following for his blog and Twitter account, rather than to give more headaches to the marketing team at McAfee (the company, not the man) to consider changing their brandname.

There’s no doubt that John McAfee loves to manipulate the media, and be the centre of attention. This video won’t do him any harm at all in that regard. The section where he appears to be pointing a gun directly at the camera is, err, perhaps a little tasteless however.

My hunch is that this video could be a viral smash. Be sure to share it with your friends if you think they might enjoy it, but warn them that the content may not be safe for work.

One comment on “How to uninstall McAfee Antivirus.. by John McAfee [NSFW VIDEO]”