Messages are spreading across Facebook claiming that the legendary action actor Jackie Chan has died performing a stunt.

Some of the messages read:

Others are reported to say:

Hollywood Breaking News – Jackie Chan died after perfecting a deadly stunt. Jackie Chan falls from a building of 12 floors. C.S.I are currently investigating. Watch the original video of the deadly stunt and their effort to save Jackie Chan. (for 18 years and above)

Of course, they are all nonsense. Jackie Chan has not died, and if you click on the links you are not going to see a video of the actor’s last dramatic stunt.

Instead, you will be lured into giving a third-party application access to your Facebook page – from where it can spam out more messages to your friends and family. At this point, you still have a chance to stop the scammers dead in their tracks. You can choose *not* to give the application access to your Facebook page. Unfortunately, a lot of Facebook users are careless, and blindly agree to give the app rights to post messages on their behalf – and that’s what the scammers take advantage of.

If you do proceed, you may see a message similar to the following: 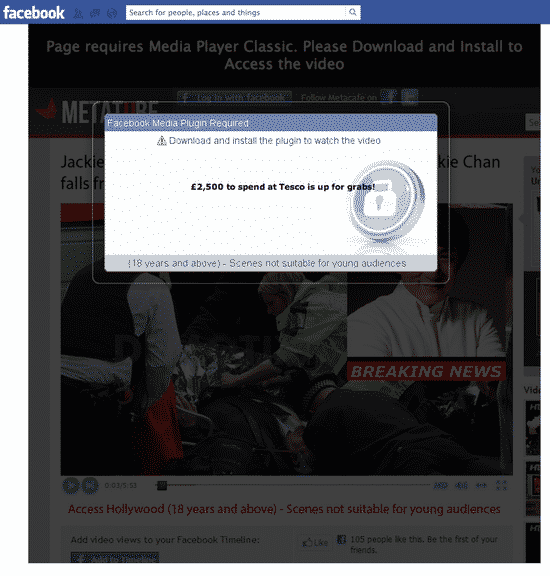 A pop-up box appears above what seems to be a breaking news video of emergency services giving treatment to someone (presumably you are meant to believe it is Jackie Chan), but you are told you need to download and install a plugin to watch the video.

At this point, all of your alarm bells should be ringing. If Jackie Chan *really* was injured or killed performing a stunt, wouldn’t there be coverage on legitimate news outlets? Wouldn’t you be able to find videos on YouTube which *didn’t* require you to install plugins first?

And then, to make it looks even more suspicious, you are told that in order to unlock the “scenes not suitable for young audiences” you need to complete an online survey for a supermarket prize! Obviously if you are prompted to download and install any software at this point, you should be extremely wary. Chances are that it could be malicious or designed to install itself into your browser to mess with your computer more in the future. And the survey is another way in which the scammers can earn money, generating affiliate cash by sending a large number of people to the survey. Let’s face it, a lot of people might be tempted to watch a movie which claims to be breaking news of Jackie Chan’s death.

Meanwhile, invisibly to you, the third party rogue Facebook application has been posting messages in your name to your online friends, inviting them to also check out the Jackie Chan death video.

If you were duped by a message like this, make sure to clean up your newsfeed and delete any offending links, warn your friends that you were duped, and revoke any applications that you aren’t comfortable with from accessing your profile.

You may also be wise to scan your computer with an up-to-date anti-virus.