A beta version of the upcoming iOS 7 iPhone/iPad operating system has only been in the hands of developers for a few days, but already testers are finding security vulnerabilities.

In the following video, highlighted by Forbes, iPhone owner Jose Rodriguez demonstrates how he was able to bypass the passcode on iOS 7’s lock screen to access hundreds of private photos within seconds.

How is it done? Simply open iOS 7’s new Control Room function (by swiping from the bottom of the screen) and make use of the quick-access icon for the iPhone’s calculator app *before* opening the device’s camera.

Rather than being able to only access photos that you have taken while the phone has been locked, you can merrily leaf your way through any of the device’s past photos and (if you wish) delete them, forward them to someone else, or even upload them to Twitter.

All without knowing the iPhone’s passcode. 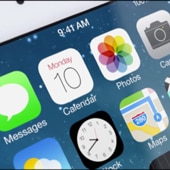 But before you sell your Apple shares, bear these factors in mind.

Firstly, and most importantly, this is a *beta* version of iOS 7 – released to developers and interested parties specifically for them to dig out bugs and report them back to the Apple mothership before the real version is released to millions of users.

The good news is that now that the vulnerability has been identified, Apple will surely fix it before the official release. Hey, we’re all hoping that they fix some of those ghastly new icons at the same time, right?

Secondly, it’s only photographs that are being accessed. Yes, that’s bad – but it’s not as bad as having full access to all of your iPhone’s data and apps.

So, there’s no need to run to the hills just yet. Bugs will continue to be found, and there will inevitably be security holes in the eventual shipping version of iOS 7 too. That’s why it’s always important to keep your operating system updated, and remain clued-up about the latest threats – *whatever* operating system you choose.

Let’s just hope that no-one finds a way to skip around the security feature that is designed to stop thieves from reselling your stolen iPhone.