For my more sensitive readers, I have edited the image below and hidden it behind a spoiler tag. (Trust me, you will be grateful I did). 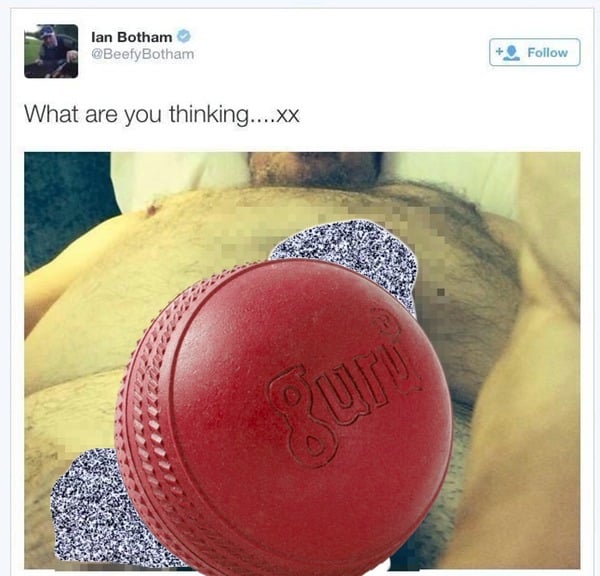 Of course, a knight of the realm and cricket legend would never tweet an picture of his middle stump so publicly.

Even if he was the sort of person who would take such a snap (perhaps to send to a member of the medical profession, or a loved one who had forgotten what he looked like from that angle) he would definitely know the difference between posting a private direct message and making a public tweet of his privates.

So, the only conclusion is that it has to be a fiendish hacker at work.

And, indeed, Botham confirmed that his account had been compromised in a reply to fellow celebrity sportsman Robbie Savage. 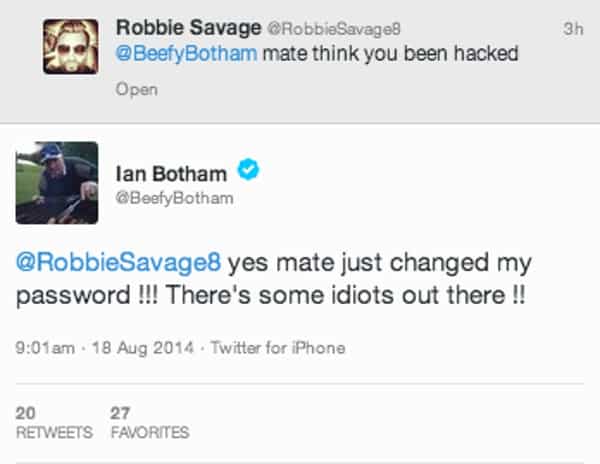 It seems that rather than the hacker spreading a message designed to phish Beefy Botham’s followers, or infect them with malware, or try to sell them an acai berry miracle diet, he fiendishly crafted his sole unauthorised tweet to appear as though it came from a middle-aged man with too much free time on his hands.

Which makes me think that maybe the knighted cricketer isn’t the victim of a typical hacker? Perhaps it’s one of his mates from the cricket circuit playing a mean practical joke on him?

Who knows. One thing is clear. It definitely *wasn’t* Ian Botham who posted that picture. I know that because he says it wasn’t him. And why would he want to tell fibs about such a thing?

Let’s hope that Sir Ian Botham has now properly secured his Twitter account and other social media assets more effectively. It would be terrible if future hacks would cause his fans to boycott his future tweets.

The only silver lining is that Ian Botham is now trending on Twitter – hopefully that will encourage others to be more careful on Twitter in future.