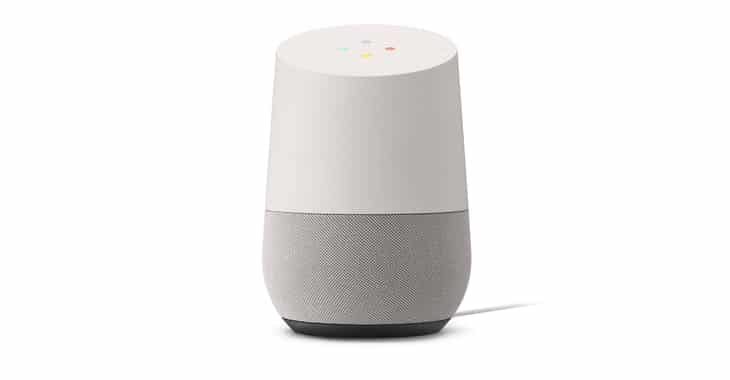 Google has agreed to temporarily stop listening to audio captured by its Google Home smart speaker across the European Union… after an investigation was started by German regulators.

A recent investigation by Belgian TV channel VRT raised concerns about what third-party workers subcontracted by Google to improve its speech recognition abilities were hearing:

VRT NWS listened to more than a thousand excerpts, 153 of which were conversations that should never have been recorded and during which the command ‘Okay Google’ was clearly not given.

But as soon as someone in the vicinity utters a word that sounds a bit like ’Okay Google’, Google Home starts to record.

This means that a lot of conversations are recorded unintentionally: bedroom conversations, conversations between parents and their children, but also blazing rows and professional phone calls containing lots of private information.

Mistaken recordings can also occur when someone presses the wrong button on his or her phone or unintentionally gives a command.

As the following video demonstrates, sometimes it is possible to identify precisely who gave the audio command to their Google Home assistant, and sometimes what has been captured is deeply personal or troubling:

Earlier this year, Bloomberg made similar revelations were made about contractors listening to Amazon Alexa recordings:

Sometimes they hear recordings they find upsetting, or possibly criminal. Two of the workers said they picked up what they believe was a sexual assault. When something like that happens, they may share the experience in the internal chat room as a way of relieving stress. Amazon says it has procedures in place for workers to follow when they hear something distressing, but two Romania-based employees said that, after requesting guidance for such cases, they were told it wasn’t Amazon’s job to interfere.”

Now, however, Hamburg’s data protection commissioner has told Google and its subcontractors to stop listening to the recordings for three months, citing privacy concerns and a likely breach of GDPR:

“As the whistleblowers’ report has shown, the employees commissioned by Google were able to gather personal information -some of it sensitive -within the private and intimate sphere of the persons concerned from the recorded conversations. In addition, a not inconsiderable portion of the recordings were done due to incorrect activation.”

The news comes as Apple announces it has suspended its own programme of using contractors to “grade” Siri conversations.

As The Guardian reports, Amazon is “the only major provider of voice assistant technology still using humans to check recordings in the EU.”

Update: Amazon now lets you opt-out of having humans review your Alexa conversations.

2 comments on “Google contractors told to stop listening to conversations captured on your Home assistant… for now, in Europe at least”