Thousands of Facebook users have once again being duped into helping fraudsters earn money, by sharing links claiming to link to a shocking video.

On this occasion the messages – which are spreading quickly across Facebook – claim to link to a gruesome video of a giant snake eating a zookeeper. 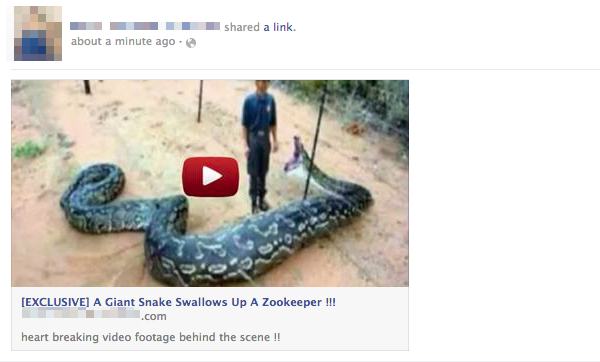 [EXCLUSIVE] A Giant Snake Swallows Up a Zookeeper !!!
[LINK]

If you see one of these messages sent by one of your Facebook friends, chances are that they were tricked into sharing the link because of their desire to see the “heart breaking video footage”.

Clicking on the link (which isn’t recommended) takes you to a third-party website which is pretending to be Facebook, complete with what appear to be comments from other users.

However, if you try to watch the video you are told that you must share the link publicly before you are allowed to proceed. 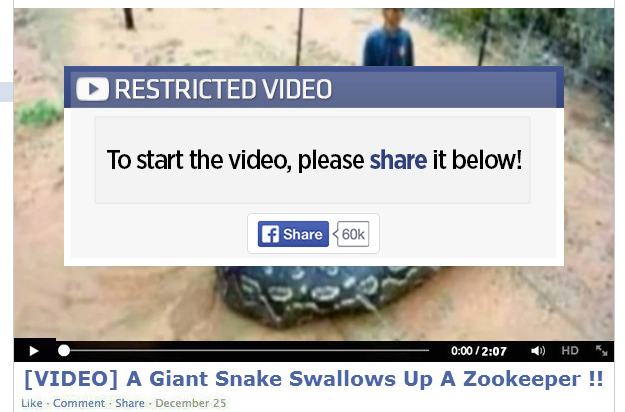 Of course, this should ring alarm bells in your head. Why on earth would it be necessary for you to *share* a video before you are allowed to watch it? You should ask yourself, what could the people behind this campaign be trying to achieve? And more clued-up Facebook users are hardly going to appreciate being spammed the link via your newsfeed.

Similar recent video scams that have spread on Facebook have included one which claimed to be footage of a shark eating a man swimming in the sea, and another which purported to be video of a woman falling from a 220 foot high roller coaster.

Men being eaten by sharks, women falling from roller coasters, zookeepers being eaten by giant snakes… even if these videos were for real, are you really the sort of ghoulish person who wants to watch this kind of thing?

The way in which scams like this make money is that they typically ask you to take online surveys, which earn them small amounts of affiliate cash. Clearly if they manage to trick *many* Facebook users into sharing the link, and use a sensational video as bait, they’re going to get a lot more people clicking on the link.

You may also find your computer ridden with irritating toolbars that you never wanted, and bedevilled by adware that is hard to remove – again, all earning money for the people behind the “giant snake” campaign.

Don’t let the fraudsters and online criminals win. If you really want to watch a video, go to a site like YouTube which never forces you to share a link on Facebook or complete an online survey before you get to watch the content.

(Be careful of links in the description and comments of YouTube videos though – scammers have been known to lurk there too!)

If you are on Facebook, and want to be kept updated with news about security and privacy risks, and receive tips on how to protect yourself online, join the Graham Cluley Security News Facebook page.