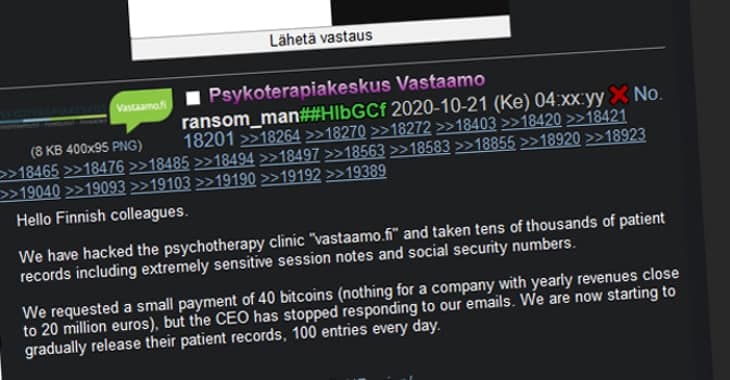 Therapy clinic Vastaamo has fired its CEO Ville Tapio in the wake of a disastrous data breach which has seen patients’ personal details, as well as notes of what has been discussed in confidential therapy sessions, exposed.

After demanding Vastaamo pay a ransom of 450,000 Euros, the hacker has emailed victims in an attempt to extort 200 Euros worth of Bitcoin.

Victims were told that if they didn’t pay 200 Euros, the ransom would rise to 500 Euros after 24 hours, and then sensitive information would be published online after 72 hours had elapsed.

To compound the horror of the incident, some of the patients embroiled in the data breach are children.

According to BBC News, Vastaamo has set up a telephone hotline for victims, and is offering those affected “one free therapy session, the details of which will not be recorded.”

Yeah, well. Too bloody right it shouldn’t be recorded.

An investigation has uncovered that the database of customer details and therapy session notes was first breached in November 2018, but there was another security breach in mid-March 2019 which apparently CEO Ville Tapio knew about but – for reasons best known to himself – did not inform the appropriate authorities or with other members of Vastaamo’s board.

News of Vastaamo’s devastating data breach was not made public until 18 months later on October 21, 2020, and Tapio was dismissed yesterday.

One of those who received a threat of blackmail from the hacker was former MP Kirsi Piha. She posted a screenshot of the ransom message on Twitter, alongside a defiant message that she seeking help through therapy was not shameful. I don’t have any sympathy for cybercriminals at the best of times, but this is possible the most despicable act related to a data breach I have ever witnessed.

I would like to think that local cybersecurity experts are helping the Finnish authorities to track down whoever is responsible, so that the culprit can be brought swiftly to justice.

Questions must also be asked, of course, as to how Vastaamo’s data could have been accessed by a hacker so easily.

Victim Support Finland has published advice for those affected by the data breach.