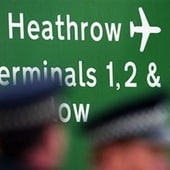 British police have arrested two men in connection with an internet attack against an online gambling website.

The two Polish men, who have been named by the media as Piotr Smirnow, 31, of Warsaw, and 35-year-old Patryk Surmacki, of Szczecin, were arrested at Heathrow airport on Wednesday on suspicion of threatening a Manchester-based online casino with a DDoS (distributed denial-of-service) attack.

It is alleged that the men launched a 36-hour denial-of-service attack against the Club World Casino on August 2 2013, effectively preventing customers from visiting the site as it was too bombarded with traffic.

Appearing before Uxbridge Magistrates in west London, the pair were accused of two offences of blackmail and one offence of unauthorised acts on computers under the 1990 Computer Misuse Act.

TechWorld reports that the police investigation into the alleged attack incorporated a number of other countries, including the United States and Poland.

Both men have been remanded in custody until the next hearing this week.

Extortion attempts involving denial of service attacks certainly aren’t a new phenomenon. In the past there have been numerous cases of websites that have found themselves the victims of attempted blackmail by criminal gangs who threaten to bring down their website.

Often such blackmailers will demonstrate their ability to flood a website with traffic from a botnet of computers, proving their ability to prevent genuine customers from reaching the site, in an attempt to convince their victims into paying large amounts of money.

Past victims have included gambling websites in the run-up to a major sporting event, who would be feel a severe financial impact if their online services were not available.

Because of the nature of internet crime, the attackers in such cases can be based far overseas, complicating investigations for the authorities.

One comment on “Suspected DDoS blackmailers arrested at Heathrow airport”