If you visit the website of the FireKeepers Casino and Hotel in Battle Creek, Michigan, you will quickly see that you are invited to:

And perhaps FireKeepers Casino and Hotel should add “Regret” to that list. 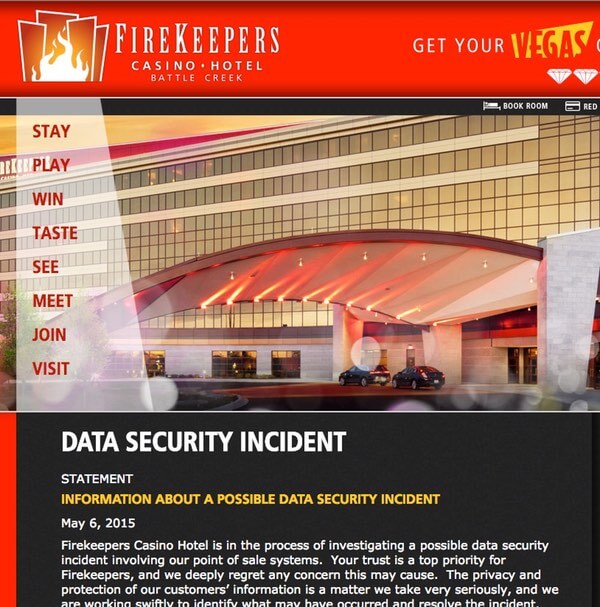 The gambling and leisure venue says that it is investigating a “possible data security incident” affecting its point of sales systems.

In other words, it believes that criminals may have gained access to customers’ credit and debit card information.

While the investigation continues, FireKeepers says it has installed new point of sales systems (because like, yeah, you’re totally going to trust it now, right?) and has informed the authorities.

So, if you have ever used your credit card at the FireKeepers casino, hotel, shops or restaurants, you might be wise to keep an eye on your statements to see if there are any unexpected transactions.

Unfortunately, FireKeepers’ advisory does not give any indication of an at-risk date range, so one has to assume that customers from as far back as August 2009 when the casino opened could be at risk.

According to FireKeepers, if you used your card for an online payment via the company’s website you should not be impacted because a separate system is used for processing online orders. Furthermore, ATMs are also believed to be safe because they are connected to a different system.

More, albeit limited, information is available on the FireKeepers’ website.

If the security incident is confirmed, FireKeepers will be the latest in a line of casinos and resorts that have recently found their systems compromised by malware – other victims have included Hard Rock’s Las Vegas Hotel & Casino and the Las Vegas Sands casino.

Maybe the best advice if you’re going to a casino right now is to leave your credit cards safely at home, and just take a small amount of cash instead.

2 comments on “If you’re a gambler, you don’t want to receive a tip like this from your casino…”