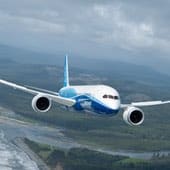 Don’t make the mistake of leaving it switched on for 248 days.

Because if you do, a bug will mean that the airplane’s power will be shut off and it could literally… umm.. crash.

All because of an integer overflow bug.

According to a critical FAA directive, Boeing discovered the bug during laboratory tests:

We have been advised by Boeing of an issue identified during laboratory testing. The software counter internal to the generator control units (GCUs) will overflow after 248 days of continuous power, causing that GCU to go into failsafe mode. If the four main GCUs (associated with the engine mounted generators) were powered up at the same time, after 248 days of continuous power, all four GCUs will go into failsafe mode at the same time, resulting in a loss of all AC electrical power regardless of flight phase.

The Guardian reports that, according to Boeing’s records, all of the 787s currently in service have been turned off and turned on again.

Boeing, meanwhile, is said to be working on a software upgrade that should be ready towards the end of the year. Which is comforting to hear.

In the meantime, next time you you find yourself travelling on a Boeing 787 be sure to ask the flight attendant when it was last switched off.

7 comments on “Turn your Boeing 787 off and on again, or it will crash”