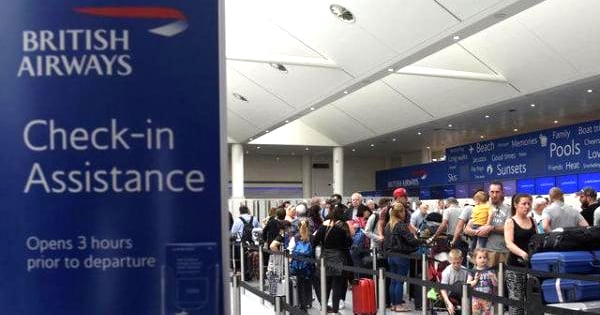 BBC News reports that British Airways is blaming its global IT failure that resulted in travel disruption for 75,000 people on human error:

The boss of British Airways’ parent company says that human error caused an IT meltdown that led to travel chaos for 75,000 passengers.

Willie Walsh, chief executive of IAG, said an engineer disconnected a power supply, with the major damage caused by a surge when it was reconnected.

He said there would now be an independent investigation “to learn from the experience”.

However, some experts say that blaming a power surge is too simplistic.

Mr Walsh, appearing at an annual airline industry conference in Mexico on Monday, said: “It’s very clear to me that you can make a mistake in disconnecting the power.

“It’s difficult for me to understand how to make a mistake in reconnecting the power,” he said.

He told reporters that the engineer was authorised to be in the data centre, but was not authorised “to do what he did”.

I can’t help but find the explanation very odd.

The fact is that big companies like British Airways have a variety of safety nets in place. Should one system fail, then it should be easy to switch over to another. If there is a power outage then you have backup power systems waiting to kick in, and you have hardware in place to handle any unexpected power surges.

Furthermore, you site your backup systems at different locations – so if something bad does happen at one site, the other is unaffected.

Your backup systems are kept in sync, mirroring each others’ data, so that it’s as simple as possible to switch from one to another with the minimum of fuss.

Did British Airways not have the right failsafes in place? Were its separate data centres not kept in sync? How was it possible for physically remote backup systems to be impacted?

And, perhaps most importantly, why did regular testing of potential disaster scenarios not allow them to discover there was a potential huge problem looming, and take remedial action?

British Airways would like us to believe that some gormless engineer pulled out a power cable and then plugged the systems in again without authorisation.

Yes, there almost certainly was some human error involved. But the people to blame are more likely to be in senior management than on the front line.

Check out this recent episode of the Smashing Security podcast, where we discuss the British Airways IT meltdown (amongst other topics):

11 comments on “British Airways blames IT meltdown on human error”