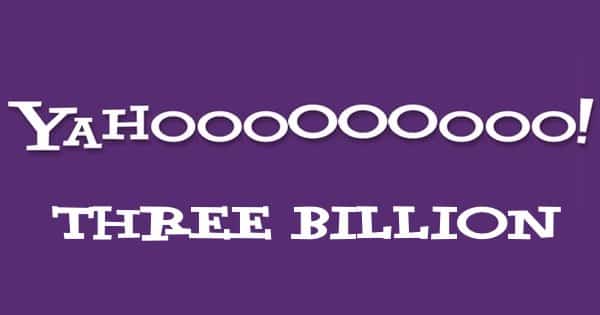 As ZDNet reports, Yahoo has revealed that the humungous 2013 data breach didn’t see hackers access data belonging to one billion user accounts as previously thought, but instead a staggering… wait for it… three billion accounts.

Here is the official statement from Yahoo, which is now owned by Oath, a Verizon subsidiary:

Yahoo, now part of Oath, today announced that it is providing notice to additional user accounts affected by an August 2013 data theft previously disclosed by the company on December 14, 2016. At that time, Yahoo disclosed that more than one billion of the approximately three billion accounts existing in 2013 had likely been affected. In 2016, Yahoo took action to protect all accounts, including directly notifying impacted users identified at the time, requiring password changes and invalidating unencrypted security questions and answers so that they could not be used to access an account. Yahoo also notified users via a notice on its website.

Subsequent to Yahoo’s acquisition by Verizon, and during integration, the company recently obtained new intelligence and now believes, following an investigation with the assistance of outside forensic experts, that all Yahoo user accounts were affected by the August 2013 theft. While this is not a new security issue, Yahoo is sending email notifications to the additional affected user accounts. The investigation indicates that the user account information that was stolen did not include passwords in clear text, payment card data, or bank account information. The company is continuing to work closely with law enforcement.

To put that enormous figure in some context, it’s estimated that there are approximately 7.5 billion people inhabiting planet earth.

It’s a sorry state of affairs when I find myself more surprised that Yahoo had somehow amassed three billion user accounts by 2013 than the fact that they managed to lose control of their data.