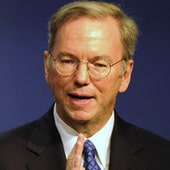 Schmidt, it must be admitted, might not be entirely impartial. He is, after all, Google’s executive chairman.

In the words of Mandy Rice-Davies, well.. he would say that wouldn’t he?

According to a ZDNET report, Schmidt shared the breaking news of Android’s security superiority at a Gartner Symposium.

Gartner analyst David Willis, who is chief of research for mobility and communications and who runs Gartner’s Senior Research Board, said to Schmidt: “If you polled many people in this audience they would say Google Android is not their principal platform […] When you say Android, people say, wait a minute, Android is not secure.”

Funny. I could have sworn that Android is a much more fragmented operating system than iOS, with a far higher percentage of Android devices not running the latest version of the operating system (and benefiting from security fixes).

Furthermore, new Android malware is seen (often even in the official Google Play store) making security headlines every day compared to the wilderness in the more tightly-policed Apple operating system.

Although – to give it some credit – at least you can get real anti-virus software for Android, whereas you can’t for iOS. Mind you, you need it for Android.

But what do you think? Take the quick poll and leave a comment below.

6 comments on ““Androids are more secure than iPhones,” says Google chairman Eric Schmidt. What do you think?”