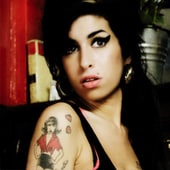 The weekend hack of the social-media sharing service Buffer saw thousands of victims sending out spam messages promoting miracle diets to their Twitter and Facebook followers.

Buffer is used by plenty of different people, of course – individuals who want to know the best time to post their messages on Twitter to boost engagement, companies who want an easy way of scheduling posts to their Facebook page.

Here’s one of the people who fell victim to the Buffer hack – Amy Winehouse, who has a cool nine million fans on Facebook.

Here’s the rather bizarre message that was posted to her Facebook page: 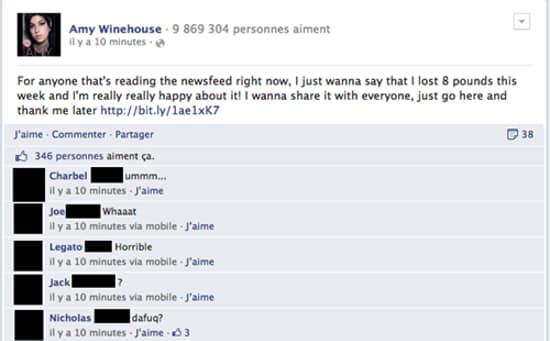 For anyone that’s reading the newsfeed right now, I just wanna say that I lost 8 pounds this week and I’m really really happy about it! I wanna share it with everyone, just go here and thank me later [LINK]

The message must have come as a surprise for her fans. Because, well.. how do I put this? For those who haven’t been following Amy Winehouse’s music career, she died in July 2011. She was just 27 years old.

But the Facebook page of the immensely-talented singer and songwriter lives on, and – it appears – fell victim to the Buffer hack.

Somehow I doubt that Amy Winehouse or her family could care less about the Buffer security breach, although the sick video malware scams that appeared just four hours after her death was announced might have been a different matter.

The good news is that Buffer says it has identified the vulnerability that the hackers exploited, is now back up and running again, and has told affected users to remove offending updates.

But whether you’re a celebrity, a corporate brand or just an individual – learn a lesson from this incident. Everytime you give third parties the keys to your account, you’re trusting them not to screw up or be hacked… and it will be you who has to pick up the pieces if it’s your online presence that ends up defaced or spewing spam.