Oh my goodness. AdultFriendFinder – what have you done to me?

In the course of writing this article I decided I should create an account on the site (using a throwaway email address, and bogus credentials, naturally). Now I feel like I need to bleach my eyeballs.

You might be wondering why I wanted to create an AdultFriendFinder account in the wee small hours of the morning?

Well, the truth of the matter is that members of AdultFriendFinder are screwed. But not necessarily in the way they might like.

I wanted to know what kind of warning AdultFriendFinder was giving its millions of members – following the breaking news that the site has been hacked, and that the email addresses, usernames, postcodes, dates of birth and IP addresses of 3.9 million members are being offered for sale online.

The UK’s Channel 4 News broke the story, and raised the alarm for those people who are users of – shall we say – one of the seedier “dating” sites online. According to reports, even users who have asked the site to delete their accounts have had their details exposed.

Okay, lets bite the bullet. AdultFriendFinder isn’t a dating site at all.

Just doing a search for AdultFriendFinder online will reveal the truth. It’s for people who want to have sex with strangers.

But even people who aren’t particularly fussy about who they rub their genitals up against deserve to be warned if their details might have fallen into the hands of hackers, don’t they?

Shouldn’t there be a warning on the front page of the AdultFriendFinder website? How about on the AdultFriendFinder blog?

Nope, nothing out of the ordinary there either. 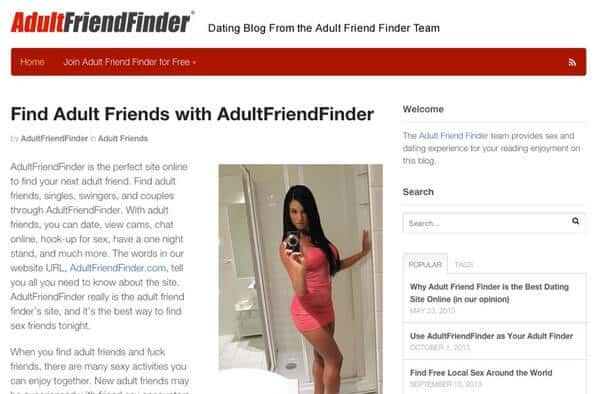 So that’s why I thought maybe they only want to warn people who are actually members of the site. So I thought if I just created an account (again, let me stress, with bogus details and a temporary email address) then surely a message would pop up telling me about their embarrassing predicament. All that happened was I was prompted to enter a realm of information about myself, my sexual preferences, my location and whether I would be prepared to relocate. Huh? What’s that last one about?

Oh, and I also received some unsolicited messages from some randy housewives who were clearly turned on by me mentioning my hankering for a good game of chess.

“FriendFinder Networks Inc understands and fully appreciates the seriousness of the issue. We have already begun working closely with law enforcement and have launched a comprehensive investigation with the help of leading third-party forensics expert. We pledge to take the appropriate steps needed to protect our customers if they are affected.”

Appropriate steps to protect your customers, AdultFriendFinder? How about posting a warning on your website so your members can look out for phishing emails, or malware which might be sent to them? What about some advice about the type of threats that users could be exposed to – including, potentially, blackmail – if their membership of the site is uncovered?

If you’re a member of AdultFriendFinder I hope you find the statement AdultFriendFinder offered the media reassuring, and that you’ll sleep peacefully in your bed tonight rather than finding yourself all hot and bothered.

Stay safe out there.

9 comments on “Millions of AdultFriendFinder members exposed after hack”