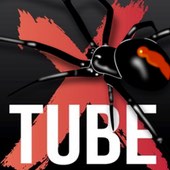 According to a report from security firm Malwarebytes, the infection has not come through boobytrapped third-party adverts on the site, but instead through malicious hackers managing to dynamically inject a line of code onto the Xtube website.

The code points to JavaScript on a third-party site that ultimately leads to the execution of the Neutrino Exploit Kit, activating an Adobe Flash exploit in unprotected computers to install malware via a drive-by-download.

In short, you visit Xtube for some cheap thrills, and end up having your computer pwned by hackers.

Something has clearly gone badly wrong at Xtube, if hackers have been able to hijack their website’s HTML code and abuse it in this way.

Malwarebytes says it detects the malware the exploit attempts to run on vulnerable computers as Trojan.MSIL.ED.

As always, be sure to keep Adobe Flash – and other software – fully patched to reduce the chances of attackers successfully infecting your computer.

It’s also more family-friendly websites (like that belonging to celebrity chef Jamie Oliver) which might have fallen foul of hackers, and be silently installing malicious code onto your PC.

Stay safe out there.

For more details of the Xtube attack, check out the Malwarebytes blog post.