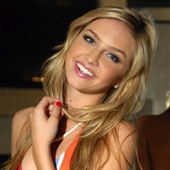 Miss Teen USA, Cassidy Wolf, says that she is the latest victim of sextortion – after a blackmailing hacker allegedly broke into her computer, took over her webcam and threatened to release candid secretly-taken photos of the teenager in her bedroom.

Miss Wolf, from Temecula, California, says that she hopes to raise awareness of cybercrime and internet risks during her one year reign.

The teenage beauty queen says that she was not aware that she was being secretly watched, as her webcam light never switched on. I don’t know what type of computer she was using, but in my experience the webcam light on most PCs and Macs is controlled by hardware, and cannot be subverted by a hacker.

Maybe her hardware was wonky, or she just didn’t notice the webcam lighting up. The jury is out on that one.

Anyway, I have more reason to trust her than the expert CNN used to describe the issue:

If you watch the above video, you’ll see the most confused description of webcam hacking ever from CNN legal expert Jean Casarez:

“But here’s how it works…” (deep breath)

“They hack into your computer and they get on websites, or your webcam, but it can be websites, where they then can… forgot your password. And they act like they’re you that they forgot your password. And then they get some personal information of you just via the internet they put that in. Then they correspond with your friends they search for your pictures and all of a sudden you are in the middle of a sextortion scheme.”

Well, I think that’s cleared up everything pretty nicely for those of us who were confused.

If you’re still uncertain, if malicious hackers manage to infect your computer they can exploit it in all kinds of ways. They can see what’s on your screen, read your emails, scoop up passwords as you type them on the keyboard, secretly send spam from your computer to other internet users, and – yes – they can take over your webcam and take photos and movies of you without you necessarily realising.

There’s an unfair stereotype that beauty queens are dumb. But compare how well Cassidy Wolf described the problem of protecting yourself against cybercrime when she was interviewed on TV:

If you’re worried that hackers might be able to see you through your webcam, take care over the links you click on and the software you install on your computer, keep your security patches and anti-virus software up-to-date and consider sticking a band-aid over the webcam when you don’t want to use it.

If you don’t have a band-aid, a beauty queen sash will do just as well.