What’s happened?
Apple has announced the iPhone 5S, which incorporates a biometric fingerprint sensor. The company is calling it Touch ID.

In a nutshell, it takes a high resolution (550 PPI) picture of the sub-epidermal layers of your skin – and checks that it matches the fingerprint it has on file for you.

If you’re lucky enough to get your fingers on an iPhone 5S, you will notice that the new Home button (ironically, the moving part of an iPhone that most often breaks in my experience) has a stainless steel ring around it, denoting where the Touch ID sensor is located.

What does it do?
You can use the sensor to unlock your iPhone, and to authorise purchases from the iTunes, the App Store and Apple BookStore. Rather than enter your four digit PIN code, or tap in your Apple ID password, you can press the fingerprint sensor instead.

So I don’t have to remember any passwords anymore?
Sorry, you still need to remember passwords. They’ve not all disappeared just yet.

How come? What doesn’t it do?
It cannot currently be used to unlock anything else on your iPhone. In other words, it can’t access iCloud, or your Keychain, or be used to log into third-party apps like Facebook. AllThingsD reports that Apple has confirmed iOS developers will not be given access to fingerprints or the sensor technology, although it’s unclear if that will always be the case.

I think it’s safe to assume that, at the very least, Apple’s own use of the technology will broaden.

It sounds a bit spooky. My iPhone can already track my location, and my private messages and documents are all being backed up to the cloud… Do I really want a big corporation storing my fingerprints too?
It’s a valid concern, and one of which Apple is keenly aware. The company says that fingerprint data is encrypted and not sent to its (or anyone else’s – sorry, NSA) servers.

Instead, the fingerprint data will be stored in encrypted form on the device (in what Apple calls a “secure enclave” of its new A7 chip), where it is not available to other processes, and will not be backed up to iCloud, Apple confirmed.

What if I want to share my phone with my partner or child?
You can teach the fingerprint sensor up to five different fingerprints. So if there is someone you trust to access your iPhone, you can include them in the system. 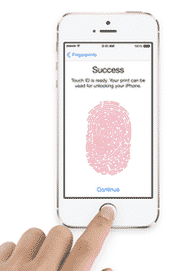 Is a Touch ID fingerprint sensor on an iPhone a good thing?
Well, that’s the $64,000 question.

The good news is that your fingerprint is always with you, and no two fingerprints are exactly alike. In other words, you don’t have to worry about forgetting your password – or choosing a weak one – if you choose to use Apple’s fingerprint sensor.

Apple says that less than half of all iPhone users have enabled four-digit PIN codes to prevent unauthorised access to their phones. Most people leave their iPhone unlocked, all the time – which is asking for trouble.

Even those people who do have some form of protection to lock their iPhone have – in the main – chosen to use a simple four digit PIN code even though an option of using a longer, more secure password is available. (Watch this video if you want to learn a great way to create a stronger, longer iPhone password and *still* remember it).

And that’s before we even raise the issue of phone owners choosing to use the same password in multiple places, increasing the risk of a device being compromised.

If you’re one of those people who has no lock on your iPhone, or using a four digit PIN code (that could be cracked by a determined data thief using an attached computer) having a fingerprint check to unlock your iPhone may be a good solution. It certainly will put a stop to shoulder-surfers who spy on your password as you enter it, although there are some grisly scenarios of how criminals might try to obtain a working fingerprint to unlock your phone…

It sounds like Touch ID is easy to use, and it certainly should help prevent jealous partners and business rivals from snooping on private emails and messages.

It sounds neat. Can I get it for my current iPhone?
No, you need to have a new iPhone 5S. They’re not even available for pre-order (so be suspicious of any scams offering you a free one!). In the United States, the iPhone 5S will be available to purchase from September 20th.

Is Touch ID going to come to the iPad too?
You’d be a brave man to bet against it.

How are hackers going to respond to Touch ID?
It’s inconceivable that malicious hackers and data thieves won’t try to subvert Apple’s Touch ID fingerprint scanning technology. How capable they will be at doing that, remains to be seen. But expect hackers to start looking at the system as soon as they can get their hands on one of the new iPhone 5S smartphones.