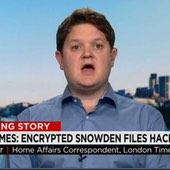 There has been a fair amount of criticism of last weekend’s Sunday Times story claiming that sensitive NSA files taken by Edward Snowden have ended up in the hands of the Russian and Chinese governments – and that British intelligence staff have been put at risk as a result.

The following CNN interview with Sunday Times journalist Tom Harper probably does the best job yet at helping us realise the truth:

I would strongly recommend you watch the video as it’s quite fascinatingly awkward and uncomfortable, but here is an abridged version of the interview:

CNN: How do senior officials at Number 10 Downing Street know that these files were breached?
Sunday Times: We don’t know. All we know is that this is effectively the official position of the British government.

CNN: Your article asserts it’s not clear if the files were hacked or handed over. So which is it?
Sunday Times: We don’t know. We’ve been very careful to stick with what we have been able to substantiate.

CNN: So we’re just really hearing what the British government is saying at this point. Were the MI6 agents directly under threat or was it a precautionary step to move them?
Sunday Times: We don’t know. A statement from senior Downing Street sources says that no-one has come to any harm.

CNN: So, essentially you’re reporting what the government is saying but so far as the evidence to substantiate it, you’re not really able to comment or explain that at this point.
Sunday Times: No.

CNN: Tom Harper from the Sunday Times, thank you very much.

Maybe the Sunday Times would have been more sensible to turn down an opportunity to defend its report on CNN. But then, I guess, the truth would have been less obvious. So they’ve done us a favour.

I actually feel sorry for Tom Harper. He seems like a nice chap, but you can tell by his discomfort that he has been set up to defend something that he realises has shaky foundations, and is indefensible in its current form. It’s just a shame he and his colleagues weren’t able to prevent the story from appearing in the newspaper.

Watching the interview it’s clear that the Sunday Times is parroting a story that the UK government wants reported, without any skepticism, and without reporters demanding any kind of evidence to back it up.

Is it any wonder that people think the Sunday Times story is a load of bunk?