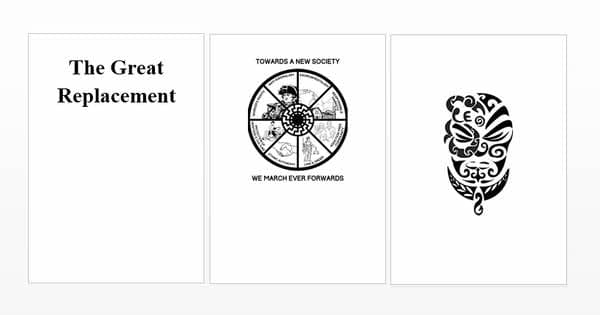 The world was horrified earlier this month by the mass-shootings of worshippers at mosques in Christchurch, New Zealand.

The document was circulated on forums and social media websites, and – in an attempt to prevent its spread – New Zealand’s government classified it as “objectionable”, and made it a crime to possess or distribute it anywhere in the country.

Well, if you needed any other reason not to hunt the internet for a copy of “The Great Replacement” to download, here’s one from the research team at security firm Blue Hexagon.

As researcher Irfan Asrar describes, someone has taken a copy of shooter’s Word document and weaponised it to download malicious code from the internet.

Anyone opening the modified manifesto could find their computer’s Master Boot Record (MBR) destructively overwritten, and as their Windows computer reboots they’ll be faced with a message:

This is not us! In many ways it’s a throwback to the early days of malware, when some viruses would overwrite a PC’s boot-up code and display messages such as “Your computer is now stoned!”. And yes, virus historians, I’m well aware that the Stoned virus was also known as New Zealand…

This new malware hasn’t been created to grant remote hackers access to an infected PC, nor to steal files, or hold the victim to ransom. My guess is that whoever created the malware-laden version of the document was outraged by the horror of the shooting of innocent people, and simply wanted to bloody the nose of anyone showing an unhealthy interest in it.