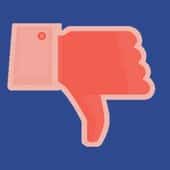 Last week the world’s press went bonkers with the notion that Mark Zuckerberg might finally relent and introduce a “Dislike” button on Facebook.

He didn’t actually say that, but never let the facts get in the way of a good story.

It seems that it’s more truthful to say that the Facebook founder and CEO wants a method through which people can empathise with posts that may contain sad news (“My budgie has just died”, etc) without the awkward feeling of pressing a somewhat inappropriate “Like” button.

As I predicted in an article last week, and in an accompanying video, news headlines about the allegedly imminent Dislike button was likely to bring more Facebook scams to the boil, offering the feature early to social networking addicts who were hungry for more functionality.

Sign up to our newsletter
Security news, advice, and tips.
No, you're not getting a Facebook Dislike button | Graham Cluley

Well, what do you know… This weekend Hackread reports that it has uncovered scams on Facebook promising – you guessed it – early access to the Dislike button.

In this example the scam uses the wording “Get newly introduced Facebook Dislike button on your profile”, and claims that the feature is currently “invite-only”.

Scams like this trick you into liking pages, and sharing the link with your friends, using the bait of something alluring (a dislike button, a shocking video, a celebrity wardrobe malfunction, and so on…)

In some cases they will even lead you to pricey premium rate mobile phone subscriptions, online surveys that generate the scammers income, or trick you into downloading malicious code onto your PC.

Don’t be duped. If you’re a Facebook crack-addict then try to resist the urge of falling for the latest scam, and wait for Facebook to properly roll-out new features as and when they choose. Don’t worry – when it happens (whatever *it* might be) I’m sure there will be plenty of members of the media writing about it.