Following an embarrassing hack that has potentially put its 37 million members at risk, adulterous hook-up site Ashley Madison is allowing all members to fully delete their profiles for free.

Which is nice of them.

Here is the relevant section of their latest press statement: Contrary to current media reports, and based on accusations posted online by a cyber criminal, the “paid-delete” option offered by AshleyMadison.com does in fact remove all information related to a member’s profile and communications activity. The process involves a hard-delete of a requesting user’s profile, including the removal of posted pictures and all messages sent to other system users’ email boxes. This option was developed due to specific member requests for just such a service, and designed based on their feedback.

As our customers’ privacy is of the utmost concern to us, we are now offering our full-delete option free to any member, in light of today’s news.

Previously, as Ars Technica describes in a report from last year, users were told they could only hide their profiles – giving them the option to return months or years later if they wished to re-open the account.

If anyone did (quite understandably in light of the current debacle) permanently delete all of their records – they were forced to pay approximately $20 to the company for the privilege. 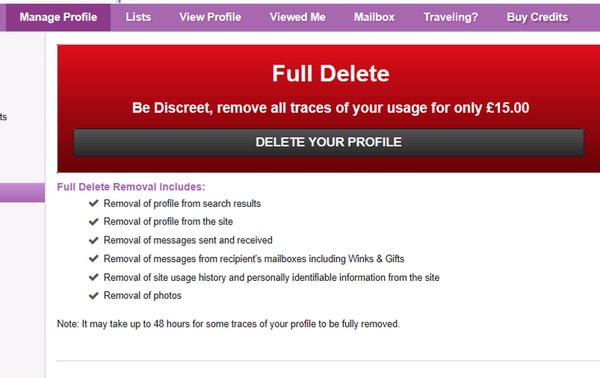 It seems to me that it would have been sensible, and more caring to their users, if they had given them the ability to fully delete their accounts from the start – rather than discouraging the behaviour by charging a fee.

The company also claims to have successfully managed to remove all of the hackers’ posts related to the security breach, including the personal information of its users.

However, you have to wonder how long they will be able to keep the lid on that particular box…