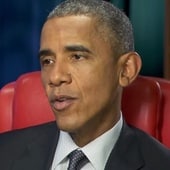 Well, this is somewhat refreshing.

Barack Obama, being interviewed by Re/Code, told journalist Kara Swisher that he was a “strong believer” in encrypted email.

You can see Obama address the controversial issue in this YouTube video of the relevant section of the extensive interview about a wide range of technology topics:

Sign up to our newsletter
Security news, advice, and tips.
President Obama on Encryption

“Ultimately everybody, and certainly this is true for me and my family, we all want to know that if we’re using a smartphone for transactions, sending messages, having private conversations, that we don’t have a bunch of people compromising that process. There’s no scenario in which we don’t want really strong encryption.”

Obama goes on to explain that the issue is likely to become hotly debated in the public, if terrorists were to launch an attack that could have been averted – if law enforcement had been able to spy upon their communications.

“The first time that an attack takes place in which it turns out that we had a lead and we couldn’t follow up on it, the public’s going to demand answers.”

Personally that’s fine with me, because (as I’ve explained before) I don’t expect law enforcement to stop terrorism.

Obama’s comments come in the wake of other world leaders (such as UK Prime Minister David Cameron) calling for secure end-to-end encrypted communications to not be allowed, because of the difficulties that law enforcement faces in snooping upon them.

Cameron’s views have caused lively debate, as you can hear in this BBC Radio punch-up I had with Professor Anthony Glees, a professor of Politics at the University of Buckingham, who directs its Centre for Security and Intelligence Studies.

I’m sure it won’t win Obama a lot of fans inside those sections of law enforcement who dislike the idea of people communicating securely, but it sure is refreshing for those of us who worry about how insecure communications could be abused by both the authorities and criminal hackers.