If you have 45 minutes to spare then I’d recommend you watch his talk, entitled “Through a PRISM, Darkly: Everything we know about NSA spying”, in the embedded video below.

One of the issues that Opsahl’s talk covers is why it matters that the authorities are collecting metadata about communications.

You may remember that last year President Obama tried to reassure the US public about the NSA’s mass-collection of data.

Here’s part of what Obama said, with my highlighting:

But Opsahl’s presentation makes very clear that metadata alone can be immensely valuable. Here is just one of the slides from his talk, that has been the subject of a lot of retweets. 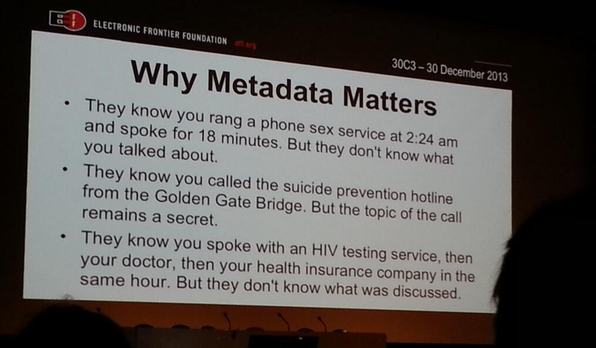 * They know you rang a phone sex service at 2:24 am and spoke for 18 minutes. But they don’t know what you talked about.

* They know you called the suicide prevention hotline from the Golden Gate Bridge. But the topic of the call remains a secret.

* They know you spoke with an HIV testing service, then your doctor, then your health insurance company in the same hour. But they don’t know what was discussed.

It’s clear that metadata can provide surveillance agencies with hard facts, and it is sometimes simple to infer what someone might be talking about.

Watch the video above and share what you think about state-sponsored surveillance. Have the authorities gone too far? Leave a comment below

One comment on “Everything we know about NSA spying [VIDEO]”