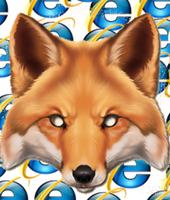 A new zero-day vulnerability has been found in all versions of Internet Explorer, and is being actively exploited in targeted attacks according to security firm FireEye.

The attack has been dubbed “Clandestine Fox” by FireEye, who say that every single version of Internet Explorer – from version IE 6 to 11 – is blighted by the flaw, which has not yet been patched by Microsoft.

It certainly is worrying news for users of Internet Explorer, which is said to have 26.25% share of the browser market.

The exploit seen by FireEye has reportedly targeted users of Internet Explorer 9 and higher, although clearly there are concerns that the remote code execution vulnerability could be weaponised in the other vulnerable versions of IE too.

Microsoft has issued a security advisory regarding the flaw, which it calls CVE-2014-1776:

In other words, you as a user don’t have to do anything odd to get your Windows computer infected by malware spread via this exploit. All you need to do is visit a website that has been poisoned by the hackers using a version of Internet Explorer.

What you won’t find any mention of in Microsoft’s warning, notably, is Windows XP. That’s not because it’s immune to attack. It’s because, Microsoft released its last ever security patches for Windows XP on April 8 2014.

As such, this is worth saying out loud (or at least in bold): If you are still running Windows XP you will never receive a patch for this zero-day vulnerability.

Alternatively, you could consider using an alternative web browser like Chrome, Firefox, Opera, etc… That’s not to say that these Internet Explorer competitors don’t, from time to time, have security issues of their own, of course, but while you’re waiting for a proper fix from Microsoft it might be a course of action worth considering.

Hopefully Microsoft will release a proper fix sooner rather than later. In fact, I wouldn’t be surprised if they pull out all the stops and attempt to issue an out-of-band patch before too much harm is done.

Why has the attack been called “Clandestine Fox”? Well, that’s a question that is best known to FireEye (and possibly related to how almost *every* threat that passes through a security vendor’s marketing department in the run-up to a major security conference needs a sexy media-friendly name).

One comment on “New zero-day exploit attack sees Internet Explorer in the line of fire. No fix from Microsoft yet”