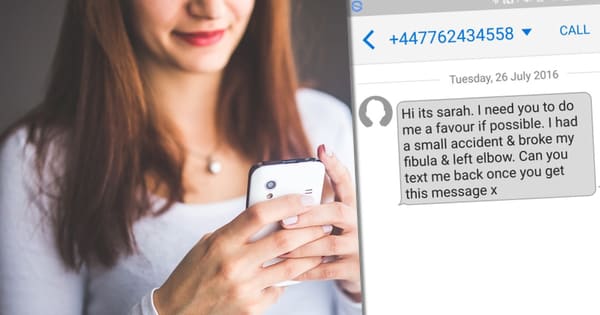 Fraudsters have embraced a new low by designing an SMS-based scam campaign that preys upon parents’ worst fears.

ActionFraud, the United Kingdom’s national fraud and computer crime reporting center, reports that in one version of the scam, targets receive an SMS message from someone purporting to be their child. That individual then goes on to say they’re in the hospital, they can only communicate via text, and they need the target to do them a favor.

As quoted by in an ActionFraud blog post, the message reads:

“Mum i did try and phone from some else phone signal is really bad, there has been a terrible car accident. I’m in the ICU ward in hospital my phone ain’t switching on and needs charging. I’m on this mobile number please make sure you reply to this number, my friend didn’t make it he died before we got to hospital and his sister’s fighting for her life. Mum i had my seatbelt on, i’ve got a head injury but i’m ok. Going into Xray to be seen, please make sure you message me back and don’t phone cause mobile phones aren’t allowed here so please text in case I’m in there. I will go outside and phone you mum its really bad i need you to do me favour before it’s too late, as soon as you get my text please reply by text i need you to do me a favour mum, time is running out and i need you to do something mum.”

That’s more than enough to throw most parents into a state of panic.

Other versions are a bit simpler. One comes from someone named “Sarah” who says they’ve been in a small accident and broken a few bones. Once again, they ask for the recipient to respond via text.

@Ofcom Are you able to stop numbers such as this sending spam? Surely illegal? Reply and you're £20 down apparently. pic.twitter.com/azQwIo80f8

If the recipient does reply, they receive a message from the sender asking them to purchase a mobile phone top-up code and text it back to them. Compliance with those demands enables the scammer to credit the cash to their mobile phone account.

Numerous people have fallen victim to this scam, including one individual who lost £20 after responding to a text sent from the mobile number 07762 434558.

As they explain in a post to Who Called:

“Got scammed £20 by this number today. I received the same texts regarding Sarah and the broken fibula and elbow. I have a relative named Sarah so spent the afternoon calling and visiting hospitals having believed the messages. Do not answer!”

Whether to make a few bucks or steal your login credentials, fraudsters have plenty of reasons to send you scam SMS messages. With that in mind, users should always err on the side of caution when they receive any message – especially one that is urgent – from a number they don’t know.

In the case of this scam, if a parent is ever in doubt, they should contact their child’s phone directly and make sure they’re okay.

2 comments on “A new low! SMS scammers prey on parents’ fears to make a few bucks”