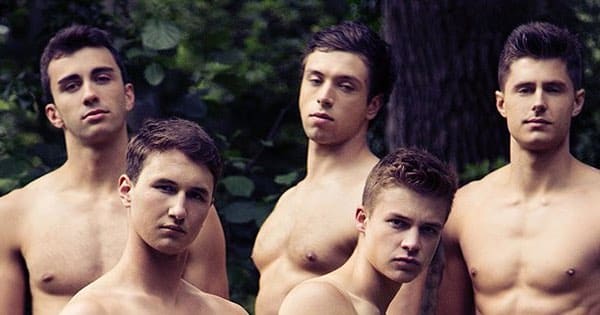 Meet some of the fine upstanding young men from the University of Warwick’s rowing club, who raise money for charity each year by posing for a nude calendar.

Apparently Warwick Rowers‘ merchandise – with its claimed message of defiance against homophobia in sport – has been reached far beyond the shores of the UK, being purchased in around 80 countries around the world each year – raising funds for charity Sport Allies.

“It began because rowing is a really expensive sport, and we don’t get as much help with our costs as rowing clubs at other, longer established universities, who may have large alumni bequests to fund sports activity. Now, the calendar means so much more to us than just a way to fund our sport. It is our way of getting a message out there that we hope makes a contribution to advancement of LGBT rights and gender equality.”

So far, nothing much to get very flustered about. Although that you may be worried that the boys would catch a dreadful chill if they got up to some of these antics in their home town, giving the typical weather in the Midlands.

But they have had an unexpected problem this year, in the form of Russia.

As The Independent reports, the saucy calendar is being turned back at the Russian border.

Imagine being in the snow-peaked mountains way down south, trying to keep your cockles warm in the Urals, and you can’t feast your eyes on some of Britain’s finest rowers.

“If they can’t cope with a few naked bums, then frankly that’s quite sad,” said Angus Malcolm, the producer of Warwick Rowers and the chairman of Sport Allies.

For Russian authorities to reject importations of the calendar is one thing, but things took a more modern twist when Warwick Rowers also revealed that their website had been targeted with a distributed denial-of-service attack, seemingly designed to prevent them from selling their calendars.

Due to recent targeted cyber attacks on our website, we have extended our #cybercrowd offers until Friday! Make sure to order your #WR18 calendar before then! pic.twitter.com/TPffg7MY4F

According to reports, the website was hit by a denial-of-service attack “which sent 7,268 visits per second” to their website. Apparently the attack was traced back to an IP address in Russia.

Either that was someone who really didn’t want any more of those calendars being sold, or it was one person who was very keen indeed to purchase a calendar for each and every one of his comrades.

A website doesn’t have to be big to be targeted by a denial-of-service attack and, in fact, if you’re a relatively small operation (not that I’m suggesting anything connected to the Warwick Rowers is “below average”) the impact could be even worse.

Whether it’s because someone doesn’t like you, wants to extort money out of you, or simply doesn’t appreciate that you have pictures of bums on your website, a denial-of-service attack is something all organisations should be anticipating – and have a plan ready to put into operation if you’re unlucky enough to become a victim.