Yesterday, the world was scratching its head as to why Microsoft had announced it would no longer send out security advisories via email. 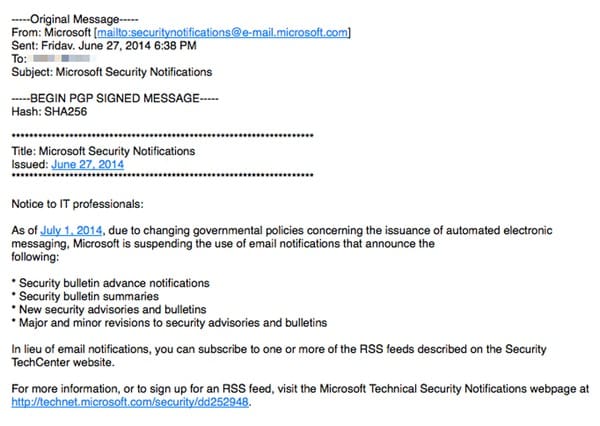 The general consensus was that newly introduced Canadian anti-spam legislation was to blame for the decision, but I and others did raise a concern that Microsoft may have made its decision with too much haste – and that its activities were probably exempted from the new anti-spam law.

Well, I’m delighted to say that there’s some good news about this particular storm in a tea cup.

Brian Krebs reports that Microsoft has realised its earlier decision was daft and a spokesperson has confirmed that it will return to automated email notifications:

On June 27, 2014, Microsoft notified customers that we were suspending Microsoft Security Notifications due to changing governmental policies concerning the issuance of automated electronic messaging. We have reviewed our processes and will resume these security notifications with our monthly Advanced Notification Service (ANS) on July 3, 2014.

This is surely good news for everybody. Huzzah!