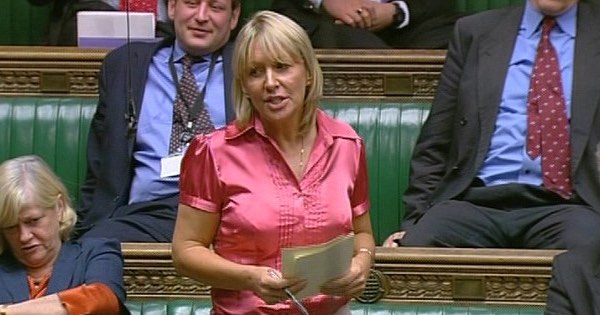 Kudos to Nadine Dorries, the British MP for Mid-Bedfordshire, who has bravely exposed the appalling computer security practices that she and her fellow politicians have in place.

My staff log onto my computer on my desk with my login everyday. Including interns on exchange programmes. For the officer on @BBCNews just now to claim that the computer on Greens desk was accessed and therefore it was Green is utterly preposterous !!

Now, to be fair, Nadine probably though she was simply supporting First Secretary of State Damian Green after revelations by a retired detective that thousands of legal pornographic images were found on his Dell PC at Portcullis House in 2008.

And Nadine Dorries attempted to support her colleague by explaining that she allowed her staff and interns to log into her computer with her password “everyday”.

When security-minded folks on Twitter began to criticise Nadine’s cavalier attitude to security (particularly pertinent in light of recent targeted computer attacks on Westminster) some of her colleagues jumped to *her* defence.

I certainly do. In fact I often forget my password and have to ask my staff what it is.

Maybe someone might like to tell Nick Boles, the right honourable member for Grantham, that he is being needlessly reckless. The first rule of passwords is that you don’t share them.

As we have explained many times in the past, the solution to not being able to remember complicated, unique passwords is to use a password manager.

Maybe next time Nadine Dorries shouts “What’s the password?” across her office floor, she might want to remember that too.

All my staff have my login details. A frequent shout when I manage to sit at my desk myself is, ‘what is the password?’

Meanwhile, Will Quince, MP for Colchester, freely admits that he leaves his computer unlocked:

Less login sharing and more that I leave my machine unlocked so they can use it if needs be. My office manager does know my login though. Ultimately I trust my team.

Nadine Dorries, meanwhile, is under the misapprehension that she simply isn’t interesting enough to be hacked.

I’m not the Gov. I’m an MP with a computer in a shared office upon which lives an email account. That’s as exciting as my computer gets

And what worries me from the above tweets is that Nadine Dorries doesn’t seem to be an isolated case. And it should worry you too if you’re a constituent of an MP who has adopted similarly lax IT security measures.

And it should worry us all if the very people who are tasked with legislating on internet privacy and security issues are proving to be so utterly clueless.