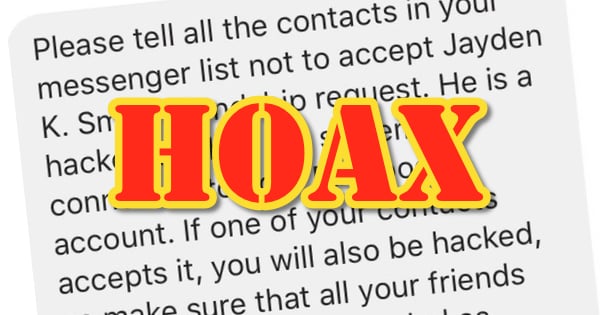 My wife left me in charge of her iPad today, as I was assigned to “fix a few things on it”.

It sat untouched on the side of my desk and then suddenly burbled up a couple of very similar Facebook notifications. Two of my wife’s acquaintances had shared a message warning all of their Messenger contacts to be on the look out for a “hacker” called Jayden K Smith who was allegedly sending out friendship requests.

Here is the message they shared:

Please tell all the contacts in your messenger list not to accept Jayden K. Smith friendship request. He is a hacker and has the system connected to your Facebook account. If one of your contacts accepts it, you will also be hacked, so make sure that all your friends know it. Thanks. Forwarded as received.

Hold your finger down on the message. At the bottom in the middle it will say forward. Hit that then click on the names of those in your list and it will send to them

It’s obvious to me, and I imagine a large number of readers, that this is nonsense. Accepting someone’s friendship request on Facebook doesn’t hack your account or computer. Of course you should always be careful who you add as a friend on social networks (and be aware that it might be a ne’er-do-well posing posing as somebody you know), but warnings like this are useless.

Imagine for a second that this could actually hack accounts, if you were a hacker why would you keep using the same name with each friendship request? What’s to stop the hacker choosing a different name once millions of Facebook users have warned each other that the person to look out for is Jayden K Smith?

The problem with people sharing these types of warnings is that there is no way to correct them, no way for them to be repealed if the facts are found to have changed or if the mysterious hacker adopts a new disguise. A genuine warning would link to a legitimate security vendor’s advisory – but these hoaxes never do.

As we’ve all discovered over the years, it’s too easy to share too much on social networks like Facebook. Many people are too lazy to check the facts for themselves and so share hoax warnings like this without thinking, because it’s a lot less effort just to hit the “Share” or “Forward” button.

I’m sure these warnings are often shared with the best intentions, but if you truly care about your Facebook friends check the veracity of what you’re sharing with a credible source *before* you share it. After all, you don’t want to be the purveyor of fake news, do you?

And, what do you know, just as I reach to hit “publish” on this article I see another of my wife’s acquaintances sharing a different type of Facebook scam… 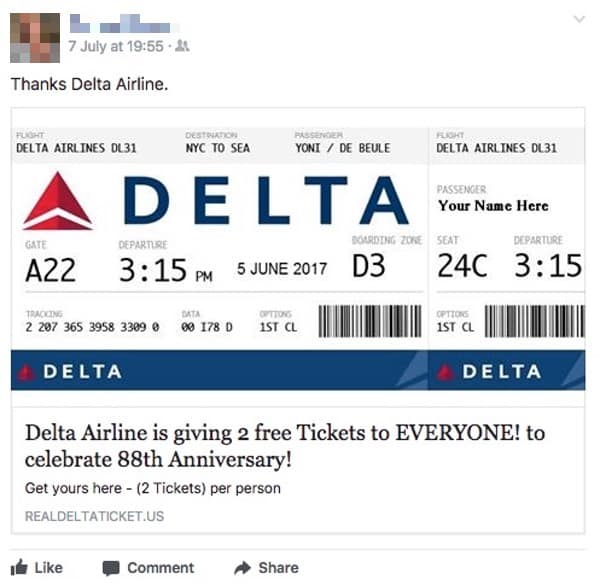