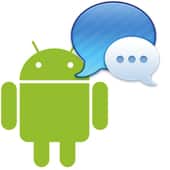 Curiously, the app was not written by Apple but by a third-party Android developer called Daniel Zweigart.

Perhaps surprisingly, Android users who have tested out the software claim that the app *does* work, and does allow you to send and receive messages between Android smartphones and users of Apple devices.

But at what cost are these messages being sent?

Sure, you don’t have to pay any money to send a message – iMessage between Apple devices is also free – but there are other considerations. 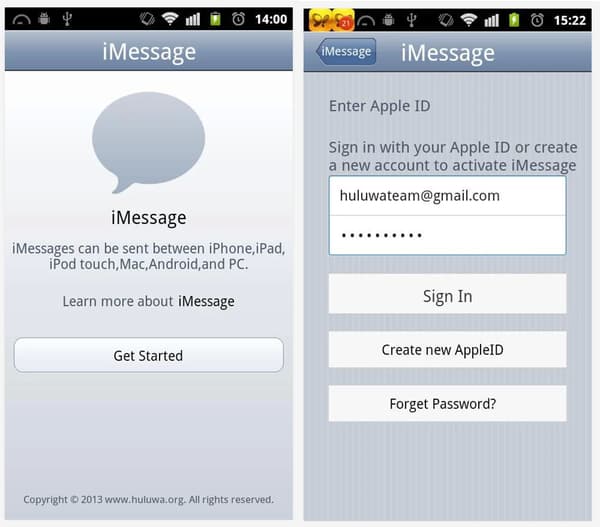 As 9to5Mac reports, the Android app fools Apple’s servers into believing it is a Mac mini in order to exchange messages with your Apple-loving friends.

And to do that, you need to enter your Apple ID and password.

You should never hand those details over to strangers.

Jay Freeman, the developer behind the Cydia app store for jailbroken iPhones, raised concerns on Google Plus that the Android iMessage app doesn’t appear to connect directly with Apple’s servers, but instead processes any messages and data it receives via servers in China. 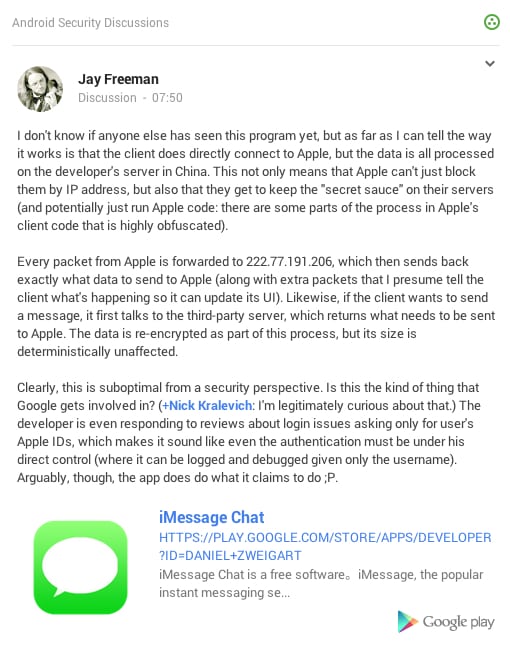 Another developer, Steve Troughton-Smith, warned on Twitter that the Android iMessage app had the ability to silently download code onto devices in the background – a feature which could be used to install malware.

I cannot state with certainty that this Android version of iMessage Chat was written with malicious intentions, but clearly there are more than enough reasons to stay well away from it.

No doubt Apple won’t delay in trying to stamp it out too. Not only will they be unhappy about their iMessage trademark being used without permission, they surely will be concerned that Android users might somehow imagine that the software has been officially endorsed by the firm. 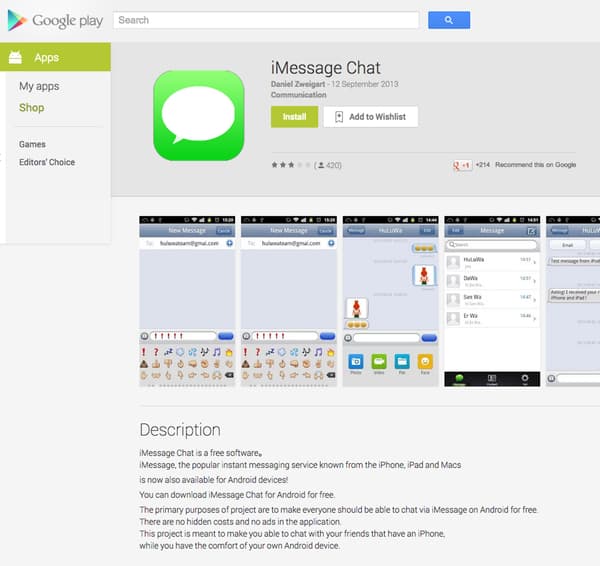 I wouldn’t be surprised if Apple has a quiet word in Google’s ear and asks them to remove iMessage Chat from the Android app store sooner rather than later. Of course, that won’t prevent the .apk appearing on third-party app marketplaces, elsewhere on the web.

Once again, Google’s policing of its marketplace is brought into question by this definitely shady-looking app.

17 comments on “iMessage for Android. Be careful what you trust!”